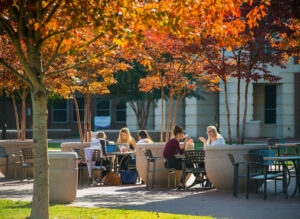 CULLOWHEE – Beverly Collins, Western Carolina University’s fall color forecaster, announced her bold predictions this week that leaf looking season this year will be pleasant and reasonably colorful in the region.

A WCU biology professor, Collins combines her knowledge of forest ecology with weather observations to evaluate the potential of the upcoming season, known to draw thousands of visitors and residents alike into higher elevations to see the surrounding natural beauty.

“Our warm, wet weather this summer and fall, along with tropical storms moving through the area, could put a little damper on fall color this year,” said Collins. “Although the National Weather Service predicts near normal temperatures and a wetter than average September, the 90-day period through November is predicted to be warmer than average.

“All the above may combine to bring on color a little earlier in some species and a little later in others, with spottier bright reds and yellows, and a less pronounced peak in late October at WCU’s elevation. On the bright side, the mid- and late fall colors may last longer, into November around campus, and later in October at higher elevations,” she said. “Thus, our color season may run from late September well into November from high to low elevations and north to south in Western North Carolina – unless a late storm knocks the leaves off the trees, of course.”

As with any forecast, there are margins for variations. Collins explained that trees’ leaf colors are a mixture of yellow, orange and red pigments that are revealed as photosynthesis and chlorophyll production wind down. These pigments, especially the yellow and orange, play a role in photosynthesis and, along with the red pigment, help protect the plant from stresses; for example, when there is drought, when it’s bright and hot, or under high UV conditions.