Dozens of cars stretched in a line to receive a COVID-19 test just three anxious days before Thanksgiving.

On Monday, Nov. 23, Cherokee Indian Hospital Authority (CIHA) hosted a rapid testing event to increase testing ahead of the holiday season. These tests offer a result within 30-minutes, and people tested will be contacted with results the same day. Testing on Monday lasted between 1 p.m. and 5:30 p.m., and testing Tuesday is planned for 9 a.m. until noon. 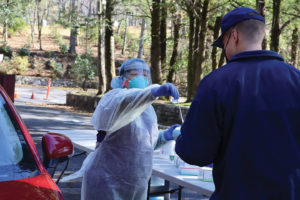 Individuals will not need to leave their cars to be tested. A nurse will swab both nostrils and you will be contacted with results that day. (JONAH LOSSIAH/One Feather photos)

Cherokee has been trending down after a severe spike in cases in mid-October. The CIHA was far exceeding state and local rates, at one time averaging nearly 110 daily cases per 100,000 people. That was more than five times the rate of NC at the time. That number has since decreased to 19.4 and Cherokee is out of the red.

Dr. Richard A. Bunio, CIHA executive clinical director, said that the major benefit of this event is to get back to proactive testing.

“We’ve been so busy lately just keeping up with the people who we knew were positive or had been exposed that we haven’t been able to do as much community surveillance as we would’ve liked to. At the beginning, we were saying ‘anybody, come get tested’. We still do that, but this is the first time we’ve been able to take a breather and get back to ‘just anybody drive up and get tested’,” said Dr. Bunio.

He said that timing was very thought out by leadership of the Eastern Band of Cherokee Indians and the hospital. The key piece of information he wishes to get across is that testing negative this week is not an excuse to have mass gatherings.

“We do not want people to think it’s okay to get a rapid test and still have a big gathering. That’s still not okay. We’re doing it before Thanksgiving because we know that some people are going to get together. If we can prevent one or two families from getting sick, it’ll be worth it,” said Dr. Bunio.

In a recent video Dr. Bunio recorded with EBCI Communications, he said that it is best for people to celebrate the holidays only with immediate family. For him, that simply means himself and his wife. Dr. Bunio said that he recognizes what family means in Cherokee, but that immediate family does not mean a large gathering is acceptable. 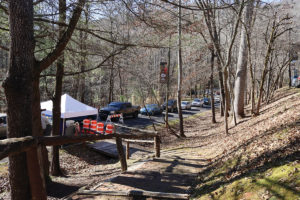 Less than an hour into testing, the line of cars reached near full capacity, stretching all the way down Drama Hill. Testing on Monday lasted between 1 p.m. and 5:30 p.m.

“I think it’s best to think of it in terms of a household, or some people call it a bubble. The people that are in your household…these are people that are living together and are going to be next to each other without wearing masks all the time. You want to keep that bubble as small as possible. It’s really more about households than it is necessarily immediate family, that’s probably the better way to think about it.”

This is the first time CIHA has offered public rapid tests, and they have stated that is because the PCR testing that normally used is more accurate.

“If you’re sick and we do a rapid test we’re going to pick up around 95 percent. The other one is going to be 100 percent. That doesn’t sound like a lot, but when you’re testing 1,000 people, it makes a big difference,” said Dr. Bunio.

However, he said that he believes rapid tests can be a useful tool if used in the right way.

Maggie Jackson, senior executive assistant at CIHA, said that another major benefit of this event is to get a better view of where Cherokee is regarding disease activity.

“As of late, we’ve actually had a decrease in testing, which has been concerning. We’ve had a pretty significant decrease in participation. That was another reason we did this mass surveillance, to increase participation. Especially with the holidays coming up, seeing decline in the PCR testing we’re doing at the old Analenisgi Building has been a little concerning,” said Jackson.

She and Dr. Bunio said there are plans to host another event later in the year. CIHA received 1,000 tests from Indian Health Services, and they are using 500 for Monday and Tuesday. If this event goes smoothly, the plan is to use the other 500 at a similar event before Christmas.

If an individual tests positive with a rapid test, the CIHA will immediately request them to then get a normal PCR test to confirm the case.

Receiving so many tests in quick succession could lead to a spike in the community numbers, and Dr. Bunio said that they are ready to move forward regardless of the results.

“I think we’ll just be upfront with the community. I’d rather know about those 20 positives out there than not. Because if we don’t know about them, we’ll end up with 40 in a week, and 80 in the next week after that. So, I think it’s a small price to pay. The community needs to know the disease activity. The community reacted, I believe, extremely well to the spike we had in the middle of October.”