The Steve Youngdeer American Legion Post 143 held a Veteran’s Day Celebration at the Cherokee Veterans Park on the morning of Friday, Nov. 13.  Due to COVID-19 precautions, the event was not open to the public, and it was held on Friday instead of the traditional Nov. 11 date due to inclement weather. 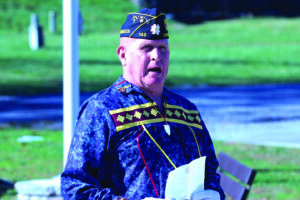 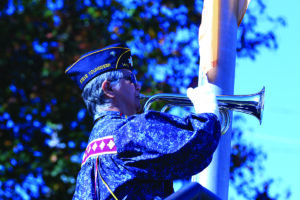 Norma Adonna, Steve Youngdeer American Legion Post 143, sounds “Taps” at the conclusion of a Veteran’s Day Celebration at the Cherokee Veterans Park on the morning of Friday, Nov. 13.

Murphy’s name was added to the section honoring those who were killed in action.  PFC Murphy, U.S. Marine Corps, served aboard the USS North Carolina during World War II.  “During the Battle of Okinawa, during hostile action, his life was taken,” Dupree stated.  “His name has never been entered on the monument, but we are proud to share with you today that his name is etched as ‘Killed in Action, World War II’.  His name will be spoken from this day on, and he will be honored with those other tribal heroes whose names are on the obelisk of the monument.”

Following the reading of names, the Post 143 Color Guard performed a 21-gun salute and Norma Adonna closed the event with “Taps”.