The Eastern Band of Cherokee Indians (EBCI) is looking into the possible purchase of the Caesars Southern Indiana casino.  Tribal Council approved funding during its regular session on Thursday, Nov. 12 to pay for various due diligence endeavors prior to purchase. 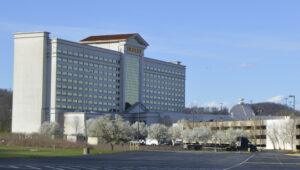 The Eastern Band of Cherokee Indians (EBCI) is looking into the possible purchase of the Caesars Southern Indiana casino shown in this photo from 2016. Tribal Council approved funding during its regular session on Thursday, Nov. 12 to pay for various due diligence endeavors prior to purchase. (Public domain image)

Caesars Southern Indiana opened in 1998 outside Elizabeth, Ind. under the name Caesars Indiana and includes a 503-room hotel and 110,000 square feet of gaming space including table games, a sports book, and 1,650 slot machines.

Council passed the legislation, submitted by Principal Chief Richard G. Sneed, which states, “…the Tribe and Caesars Entertainment, Inc. have signed a letter of intent expressing the Tribe’s desire to potentially purchase the Southern Indiana casino being sold by Caesars if the parties can agree on terms for the transaction…the letter of intent states that for 45 days from the date Caesars signed the letter Caesars will work exclusively with the Tribe regarding the potential transaction and will not entertain offers from other potential buyers.”

The legislation states that the due diligence required prior to purchase will be around $500,000.  “…the Tribe must hire subject matter experts to examine the financial and legal details of the casino and all the engineering, structural, and environmental aspects of the facility”, the resolution states.

In addition, $10.11 million will include “unavoidable costs such as regulatory licensing fees, debt financing fees, insurance and other costs”.  A total of $150,000 will be used to pay for “local legal counsel in southern Indiana” and $1.5 million will be paid to the law firm of Brownstein, Hyatt, Farber, and Schreck – a firm currently under contract with the Tribe.  The legislation notes that the $1.5 million will be used “to pay monthly invoices for work actually performed by that law firm through the date of closing of the purchase”.

During discussion on the issue during Thursday’s meeting, Chief Sneed stated, “What we’re purchasing is cash flow – a business with a known amount of cash flow and a known return to the Tribe.  The vetting process includes a major audit of their books.  We’ve been shown the books, but we will actually have an outside auditor.  So, part of that due diligence is to get an outside audit before the purchase.  An engineering firm will inspect the property to see if there are any major issues with the structures – with the building, parking decks, anything involved.  All of that would be inspected.”

He likened the purchase to a person purchasing a home and hiring a home inspector.  “We’re having everything looked at from top to bottom, inside and out – IT systems, structural systems, financial systems, the revenue.  Every last thing is going to be vetted before we sign on the dotted line.”

Yellowhill Rep. Tom Wahnetah made the move to pass the legislation and said, “We’re not purchasing the property right now.  This is just to do our due diligence to make sure that the property is everything they claim it is.”

He added, “I think this is a good start to make sure that we don’t make a bad decision on this property if we decide to buy it.  This is not giving Chief permission to buy this property.  It’s just us doing our due diligence.”

Chief Sneed stated that the process is new to the Tribe.  “It’s new to us because we’re used to green field projects where we own the dirt and we start the project and we build from the ground up.  We’ve never had to go through this process before because we’ve never acquired an existing casino before.”

He noted that the Tribe has had a “monopolistic run for 23 years” with its gaming enterprise and spoke of the need for more revenue diversification within the Tribe.  “We’re painfully aware that that’s going to come to an end, and the decisions that we make now or don’t make now will determine where the new normal is on the downside.  We’ve had 23 years of all up-side…We’re looking for long-term stability and sustainability and being able to fund these programs in perpetuity.”