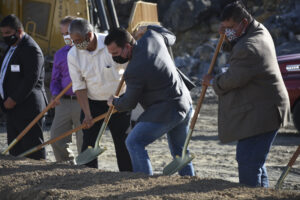 A ceremony was hosted on Tuesday, Nov. 10 to launch the joint project between the Tribe and the county. The land was purchased in 2019 by the EBCI for $13.5 million, and the Tribe entrusted the planning of the project to the Kituwah, LLC.

The site is located just off I-40 between Knoxville and Asheville and sits about one and half hours from the Qualla Boundary. It will be an ongoing project that will look to be the ultimate road trip stop. Plans for specific businesses are not yet finalized, but the location will house a number of retail businesses, attractions, restaurants, and other entertainment. These will be paired with an enormous stretch of gas pumps and a travel center.

A completion date for Phase One of the project has not been released, and when asked OE Experiences stated that the COVID-19 pandemic has made specific construction projections difficult set.

Mark Hubble, chief executive officer of the Kituwah, LLC, said that it’s been a smooth process so far.

“The city and county made it relatively easy. I was told that if we’d been in other counties it might’ve been much more difficult. They’ve been very gracious…They prepared all of this. It has been shockingly productive,” said Hubble.

When discussing with his staff and the Tribe about how to use the land, Hubble said that they landed on this idea because of the type of plot and the high level of traffic in the region.

“It really came to the top because of the location of it. Because this is the busiest intersection on I-40, at least in this state, and for a long way on I-40. So many visitors pass that intersection across the street that it made a natural fit for a stop along the destination, whether that destination is here or is further in towards the Smokies.” 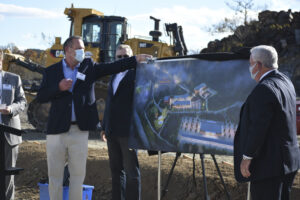 Hubble said that getting a project like this started in the current climate is a big relief, and that he is looking forward to next steps in the process.

“It’s satisfying. Primarily because in this environment, it was really important to get something that would do well regardless of how long this pandemic were to last…I thought it might be more difficult than it was in terms of acquiring key tenants during such a trying time, but it has not been as difficult,” said Hubble.

On the Sevier County side of operations, they have tasked the handling of the lot to OE Experiences, a local development consulting firm. Matthew Cross, chief executive officer of OE Experiences, said that this is a mutually beneficial for several reasons. He says the Sevier County has a heavily tourism-based economy, and that this project could to really boost that economy.

“That means jobs here for local community members. It means new businesses being able to establish, it means revenue for these local governments. As a business owner, Kituwah, LLC stands to economically benefit. A successful project means more money for the developer, Kituwah, which of course more opportunity for new investment. Or, for co-development partners to see how well Kituwah is doing and join in,” said Cross.

This is a drawing of what the final product of ‘phase one’ will look like.

“The Eastern Band of Cherokee Indians are an incredible group. I’ve had the pleasure of interacting with the Tribe in many different ways. I actually worked at the Casino many, many years ago. So, the Tribe means a lot to me. As a local, I feel like we’re in the rare position to serve as a bridge builder. To help represent the Tribe’s interests and to help represent local government’s interests,” said Cross.

In attendance as well was all of the EBCI’s Tribal Council members, Vice Chief Alan B. Ensley, and Principal Chief Richard G. Sneed.

Chief Sneed said that this is huge step for the Tribe in both a short-term and long-term perspective. He said that he is proud of the work that has been demonstrated by the Kituwah, LLC, and that this is the exact type of work that was expected when it was initially formed. He also said that his was thrilled with the support that Tribal Council and Executive have shown together towards projects like this.

“The reality is everybody who has ever run for office in the last 25 years has said the same thing, ‘we need economic diversification’. And, it is this Council and the Council before it that approved the Kituwah, LLC…they approved the ordinance to create the LLC and then funded it. Then, this seated Council here has given them the seed money need to make projects like this happen,” said Chief Sneed.

The idea presented by both the Tribe and Sevier County was that this will be a project that continues to grow in scale, and more offerings will arise with time and increased revenue.

“Most important, what needs to happen, is our people need to understand economic development like this, this is just phase one. We need more of this. Because of the simple fact that the monopoly we’ve enjoyed in gaming the last 23 years, it’s going away. That’s a reality. Decisions we make now, or the decisions we don’t make now will determine what our new economic reality will be three years from now, five years from now, and beyond,” said Chief Sneed.