Braden Taylor, a senior at Cherokee High School (CHS) and a member of the Eastern Band of Cherokee Indians, has signed a letter of intent to wrestle next year at Belmont Abbey College in Belmont.  The official signing took place in the Charles George Memorial Arena on the morning of Wednesday, Nov. 11. 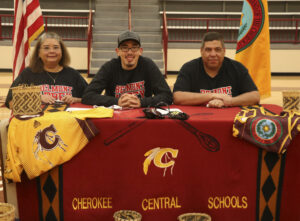 Braden Taylor, center, a senior at Cherokee High School and a member of the Eastern Band of Cherokee Indians, signs a letter of intent on Wednesday, Nov. 11 to wrestle next year at Belmont Abbey College. He is shown with his parents, Katrina and Bill Taylor. (SCOTT MCKIE B.P./One Feather photos)

“It’s a big achievement for me,” he said following the signing adding that his parents wanted him to go to college and succeed in life.  “That’s what I’m going to accomplish right now.”

He plans to major in personal finance at Belmont Abbey.  Taylor has also set some wrestling goals for when he arrives, “My first goal is to make it on the team and make the starting line-up.  I want to start as a freshman and hopefully qualify for the NCAA tournament.”

Taylor took fourth place in the 160lb. division at the 2020 1A West Regional Meet, second place in the 2020 Smoky Mountain Conference Meet, and first place in the Chief Osley B. Saunooke Memorial Tournament.

“I know you’re going to do great things,” Craig Barker, CHS assistant principal, said to Braden as he spoke during the event.  “I am excited for you going to wrestle, but, most importantly, I am excited for you to get that education.  You come from a great family, and I expect you to be a tribal leader one day and represent our school and your family in the right way and I know you will.  We’re just very proud of you, and I’d like to congratulate you and your family.”

Bill Taylor, Braden’s father, said, “The last six years has been tough on him.  He’s been getting up at 6 o’clock in the morning, running three miles, working out, lifting weights while the rest of his friends are still in bed.  All of the hard work is paying off.  He didn’t eat Thanksgiving dinners, Christmas dinners – cutting weight, six or eight pounds in a day or two.”

He added, “I think we need to support all of our kids and push them to get an education.  I think I’ve raised a smart, strong Cherokee man who is going to come back one day and do good things for our people here on the Reservation.”

The Belmont Abbey Crusaders wrestle in Conference Carolinas which is NCAA Division II. 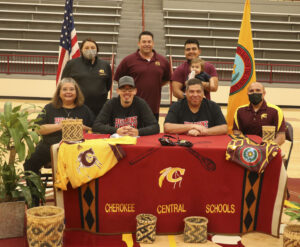