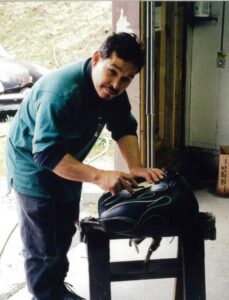 George L. Rosario Sr., Nickname (Karate) given to him by his mother-in-law Nellie, died peacefully at home. George who was 70 years old passed away on Thursday, Nov. 5, 2020. He was a member of the Cherokee Baptist Church. He lived in the Paintown Community most of his life. George is in Heaven with his Lord and Savior Jesus Christ; he is not suffering anymore.

He was an avid auto body repairman, known for his customizing work here on the Qualla Boundary.

He is survived by his wife of 50 years, Regina Ledford Rosario; a son, George Jr.; a brother, Freddy Rosario from Philadelphia, Pa.; three sisters, Mildred Camacho and Willie from Philadelphia, Pa., Minerva, and Elsie Rosario from Philadelphia, Pa.; seven grandchildren, five boys and two girls. All of these people were God sent in George’s life. A son-in-law, James Wolfe (JR) who was by his side till the very end; Jorge Torres who we could depend on no matter what; sister-in-law, Renee who sent out multiple Prayer Chains for him throughout the years; Javied Hernandez, who came when we called; a nephew, Buster Bowman who came by frequently to check on him; Ismael Torres who called him frequently just to talk, and several aunts and uncles from New York who treated him well.