The book, illustrated by Justin Reed, is available for free download at: www.cherokeespeaks.com. 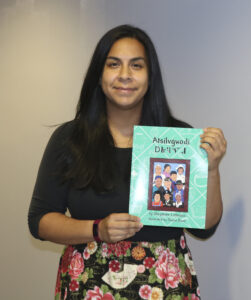 Sheyahshe Littledave, a member of the Eastern Band of Cherokee Indians, is shown with a children’s book entitled “Atsilvgwodi” that she wrote about the Beloved People of the Tribe. (SCOTT MCKIE B.P./One Feather photo)

The concept for “Atsilvgwodi” was born when Littledave attended a book fair with her son at his school.  “We were looking through all of these books about people in U.S. history and what they’ve done.  And, it was there that I was thinking that he doesn’t have anything that really introduces him to significant people within our Tribe.”

Shortly after developing the idea in her mind, Littledave reached out to Chris McCoy, EBCI Communication manager.  “He’s got talented people on his team, and it just snowballed from there.”

McCoy said that the vision of his program is to disseminate information to the Cherokee public through various media.  “In the past, we’ve done video.  We’ve done photography, and we’ve written articles and done mailers.  But, we’ve never done a book – something that can get out to the youth.”

It is his vision that this book is just the first.  He wants to do more.  “These things live forever, and they’re digital.”

For right now, there was only a very limited run of printed copies which were distributed only to members of the Beloved People’s families.  The book is only available to the public via the free download.

“Certainly, from the EBCI Communications perspective, this fit our mission of educating the community about our culture, our heroes, our language, and the things that are important for the community to have,” said McCoy.

Littledave added, “We just want people to have access to this information.  We don’t want to limit or stifle people in being able to learn more about our people, our history, and our culture.  That’s one of the reasons that we decided that the e-book would be the best route to go.”

Littledave said the project took around a year from idea to product noting that there were several drafts of text and illustrations along the way.  “It was worth going through that process because when the families saw the picture and saw their loved one, their response was really powerful.  It was really important for us to be able to connect and them really see their loved one.”

McCoy said his program is very much looking forward to other such projects.  “For the most part, it’s a very low-cost type of project, and so we want to continue to produce new content like this.”

He said that a recent conversation with KPEP (Kituwah Preservation and Education Program) officials was fruitful.  “They’re going to send over all of their cultural books, and we’re going to digitize them for our library and do a very similar offering.  So, we have tons of content that already exists from KPEP that is mostly language-based.”

Littledave, who has a passion for reading and books, said she’s learned a lot in the process as to how books are published.  “I’ve also learned a lot culturally because a lot of these families just share so much.  They’re so willing to share with you about who this person was and why they were so special.”