The Board asked several questions of Chief Sneed, either about how the Tribe could support the school or what his thoughts were on opening. He said that he believed that CCS had a strong advantage due to the size of the student population. He said that this would make it easier to manage the day-to-day in the school. 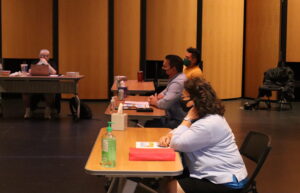 Chief Sneed also said that the Tribe would help to accommodate the school in any way they could. Whether that meant offering additional services with day camps if the school wished to maintain Plan C or making leave allowances for Tribal workers in the case of reopening. He made it clear that they would remain flexible on the Tribal side.

“I think what this demonstrates as well is really the beauty of Tribal sovereignty and the beauty to be able to coordinate through the school system, public health, the hospital, and the Tribal operations side. As long as we keep the lines of communication open, we’re here to help,” said Chief Sneed.

Secretary Bradley offered a presentation to the Board with updated COVID-19 numbers for the Tribe and the western North Carolina counties. She also discussed multiple risk factors associated with reopening, as well as how to mitigate many of those issues.

“I don’t think the there’s an end to the pandemic soon. I really think we’re probably in pandemic mode for easily nine months, based on all the evidence.”

Wolftown Rep. Chelsea Saunooke was the first to offer her opinion on reopening.

“I’ve been blown up both ways. ‘Don’t send them back’. ‘Yes, send them back’. The ones who want theirs to go back, yes, their kids I would say are suffering with their behavioral health. It’s not good to be confined or stuck at home and lose out on that socialization,” said Rep. Saunooke.

“Some parents aren’t teachers or don’t know how. We have some kids that are suffering out there as far as getting what they need out of the classroom. It just breaks my heart that we have so many out there that aren’t online learners. I know just being a college student, I couldn’t take only courses. I thought I could, and I couldn’t, and I had to go back to the classroom.”

The Board continued to debate the subject of reopening for about an hour.

“At some point, for lack of better terms, we have to take that jump to see what’s gonna happen,” said Board Chair Thompson.

“We can always pull back; we can always go back to virtual. If we come in and we have five people come back positive, the health department’s gonna step in.”

The first few members to speak were in favor of opening under ‘Plan B’, which is a hybrid system that uses both in-person and virtual learning. This was not unanimous, however.

“I hate to be the one to disagree with you guys, because I am a teacher. I’ll always be a teacher. I’m also a grandmother. My people in Big Cove, only one person that talked to me wanted their kids to come back to school. And that was because they missed their friends, they wanted to see their friends. Not so that they wanted to come back so that they could get taught,” said Board Member French-Browning.

She advocated taking the safest approach possible and asked if the decision to reopen could be delayed.

“I’m sorry, but if one child or another staff member comes to this school and something happens to them, it’s going to be on us, guys. And I know, I’m a teacher. I know these kids need to be in school. You talk about special ed, I know special ed. I know those kids have got to have order, they’ve got to have consistency, but is it worth one of them getting sick? What’s two months? Give it two months for the end of the semester,” said French-Browning 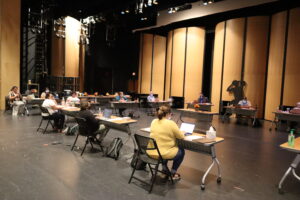 Thompson said that getting the children back in the classroom was vital. She said that remaining in ‘Plan C’ could be detrimental in the long-term. She also referenced what Bradley had said in her presentation, that there is no end-date for this pandemic.

Once each viewpoint was given and finalized, Reed-Cooper made a motion to reopen the schools under Plan B, with an option to opt-out and remain in remote learning. The motion was seconded by Gloria Griffin and passed by a 4-2 vote. French-Browning and Ledford Rosario voted against the motion.

Kids will be divided into ‘maroon’ and ‘gold’ groups that will alternate in-person classes for two days at a time. One day will be used as a sanitization and teacher workday. The specific days of the week will be decided after surveying the school’s teachers. The initial plan purposed was to have one group attend Monday and Tuesday, and the other to attend Thursday and Friday.

Those groups will be decided by the community of the student. Currently, ‘maroon’ will include Birdtown, 3200 Acre Tract, Big Cove, Towstring, and Yellowhill. ‘Gold’ will consist of Big Y, Painttown, Wolftown, and any students off the Boundary.

Parents that wish to maintain remote learning for their children will be allowed to do so. The initial discussion suggested that if a family decides to remain in ‘Plan C’, that decision would hold until the next semester in January. However, the Board wished to discuss this further before making a final decision.

Before the vote on reopening, the Board handled two pieces of business. First, they quickly passed the consent agenda, which only had one item. That put forth that Timothy Swayney is approved as an elementary teacher assistant.

The other item that was passed was moving forward with a waiver application for 25 CFR Subchapter E Regulatory Requirements. This was just a brief discussion between Dr. Payne, Dr. Murray, and the Board. It was encouraged that they move forward with this waiver given the uncertain nature of this semester. The waiver makes sure that BIE funding for next year isn’t affected due to unplanned issues caused by the pandemic.

The Board then took a break to eat before moving to a closed session for the remainder of the meeting.

The next meeting of the CCS Board of Education will take place on Monday, Oct. 5 at 4:45 p.m. in the Chief Joyce Dugan Cultural Arts Center.