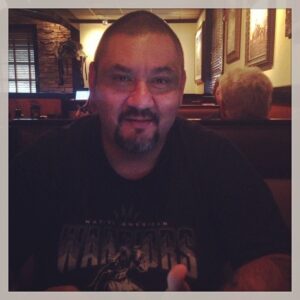 Jody Mark Davis, 47 of Cherokee, never met a person he didn’t like, and everyone who met him loved him.  He made a lasting impact on all those whose paths crossed his, and on Tuesday, Sept. 15, 2020, surrounded by family and friends, he crossed his final path to join those who went before him.

Jody was born to Pete Davis and Delores Browning Davis on Jan. 9, 1973.  He was an avid video gamer and quite the basketball player during his high school days.  Jody was a member of the 1990-91 Braves basketball team that took all of Cherokee on a wild ride to the NCHSAA 1A state championship game.  He graduated from Cherokee High School in 1991, and he began a lifelong career in the gaming industry shortly thereafter.

Jody was known for his kindness and his humor as his friends and co-workers are quick to point out.  His disposition and kind nature were very much like that of his beloved mother.  He loved Duke basketball, the Chicago Bears, baseball, his fur pals, and his beautiful children.

Jody is preceded in death by his parents; his brother, Denning Rochester; special uncle and aunt, Dude and Wilma Davis; and close friends, Dee Owle, Jamy Jenks, and Barry Fish.  He is survived by his wife, Stephanie; children, Rayna, Maiya, Evan, and Cole; granddaughter, Raylyn; and brother, Jeff.  He also leaves behind numerous cousins, nieces, nephews, and close friends who became family.

The immediate family will be holding a small, private graveside service.