A new exhibit at the world-renowned Eiteljorg Museum will feature the work of a Cherokee artist.  Luzene Hill, a member of the Eastern Band of Cherokee Indians (EBCI), has an installation entitled “Retracing the Trace” in the Museum’s “Powerful Women: Contemporary Art from the Eiteljorg Collection” that is on display now through March 2021. 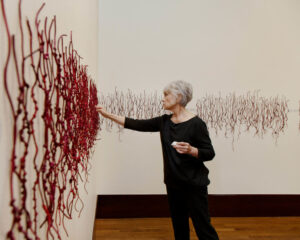 Luzene Hill, a member of the Eastern Band of Cherokee Indians (EBCI), has an installation entitled “Retracing the Trace” in the Museum’s “Powerful Women: Contemporary Art from the Eiteljorg Collection” that is on display now through March 2021. (Photo courtesy of Luzene Hill)

“This work is a time- and process-based installation about violence against women in which I used principles of the Inka khipu as a counting device to illustrate statistical data related to unreported assaults,” said Hill.  “This work came from my own experience of violent trauma and was influenced by Ana Mendieta’s ‘Silueta’ series.”

Of her installation, Hill notes, “In previous installations, I addressed the issue of violence against women in an abstract and personally-detached way.  ‘Retracing the Trace’ marks a shift in my approach to the subject.  Each aspect of this work reflects my identity and involvement, from making the body imprint to removing the last cord from the floor and attaching it to the wall.  The gallery is a metaphor for my body, as I draw attention to the number of sexual assaults that go unreported and renounce the traces of my own trauma.”

She adds, “The incidence of violence against Native American women is almost three times greater than the national average and 90 percent of the sexual assaults are by non-Native men.  Historical precedents of conquest and colonialism continue to play out.”

Hill keeps her heritage at the forefront of her artwork and mindset.  “It’s important that Native people are identified and recognized culturally, in whatever their endeavors – the arts, business, politics.  I’m grateful that early in my exhibition career I showed some of my first drawings at the Museum of the Cherokee Indian, at Western Carolina University, and at UNC-Asheville.  I often have the opportunity to talk about EBCI culture when I’m giving artist presentations.  I love pointing to our rich legacy of literacy, sovereignty, and resistance.”

Always moving forward and changing within her artwork, Hill notes, “I continue to be drawn to pre-contact culture, and for the last three years have been using BCE goddess motifs.  I just completed work entitled ‘Retribute’ that will open on Sept. 26 at 516 ARTS in Albuquerque in a group show, ‘Feminisms’.  This new work features three beeswax figures, replicating some of the earliest known female images in the Americas.  It also includes three capes made of heavy-weight mylar.  I am referencing pre-contact culture, especially matrilineal societies, and bringing those ideas into the present through material and context.”

Hill received an Eiteljorg Contemporary Native American Fellowship award in 2015 and is excited to be included in this current exhibit.  “I am honored to be in an exhibition with such amazing artists – Kay Walkingstick, Marie Watt, Bonnie Devine, Anita Fields, and Skawennati.  Besides showcasing strong female artists, this exhibition displays a wide range of artistic expression.  I believe public awareness of Native culture will be expanded by this exhibition.”

For more information on the “Powerful Women” exhibition, visit: www.eiteljorg.org