The Eastern Band of Cherokee Indians (EBCI) is represented in a beadwork project covering all states and provinces of the United States and Canada.  The design of Brandy Watty, an EBCI tribal member, was selected to represent the State of North Carolina in the project facilitated by Kooteen Creations.
“It all started with me following Kooteen Creations,” she said.  “I loved her work, and she inspired other beaders to try and not give up, and also spoke about how beading is medicine.  Doing so, she came up with this idea to bead your state while quarantine was going on to pass the time.  So, I decided to give it a shot.” 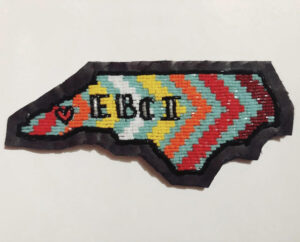 The design of Brandy Watty, an EBCI tribal member, was selected to represent the State of North Carolina in the “Bead Your State” project facilitated by Kooteen Creations. (Photo contributed)

Information from Kooteen Creations on the project itself states, “Different tribes and families, different styles and cultures, different histories and people, all came together in a time of turmoil to bring medicine to themselves and all of us who appreciate the work.  The process has been riddled with remarkable examples of overcoming, persistence, strength, dedication, compassion, and humility.  Beading brought out the human in people, and there are truly some incredible stories that thread each border…”

Each piece of beadwork in the project is shaped like the state or province it represents.  Watty’s piece, of course, is shaped like North Carolina.  “My design I was going for was to make it look like a river cane design, and the heart on it represents where the EBCI is located.  The colors are my favorite ones I love to use in my beadwork – turquoise with fire colors.  Hex beads were my first go to.  I wanted it to look more noticeable with the sparkle hex beads give off.”

She features her beadwork creations on Facebook at Brandy’s Beadwork and Gems.  “I am honored to represent North Carolina and the EBCI with my beadwork I submitted.”

Watty has been doing beadwork since she was in the 8th grade at Cherokee Middle School.  “I took arts and crafts.  Alyne Stamper was my teacher.  I never was really interested in arts and crafts until I started that class.  I’ve been beading for 13 years and counting.  My favorite things to bead are earrings, badge reels, pop sockets, and medallions – pretty much anything that people can wear to show off.”

Watty, originally from the Big Cove Community, now resides in the Yellowhill Community with her husband, Jeremiah Pheasant, and their child/dog, Samuel.  “I am far from perfect.  My life was heading down the wrong road by being in addiction for 10 years and finally coming to the realization that there is more to life than drugs and chasing a high.  We were pretty much just using to feel normal.”

She added, “If it wasn’t for my husband getting into the Suboxone Clinic at Analenisgi, I would not be here now.  I see him and Analenisgi as a blessing.  People get the wrong perception about Suboxone and say it’s trading another drug for a drug, but it’s so much more.  Yes, I do have to take it everyday, but I’m not abusing it.  We both have jobs, a roof over our head, two cars, and we have been on two vacations since we have been in the clinic.  Those are things we would have never thought we would have ever gotten to do.”

To those struggling with addiction, Watty says, “There is so much more out there than chasing a high you are never going to feel.  Reach out to better your life for yourself, your kids, and family.  As a Tribe, we need to break the cycle of addiction.  I know we can’t stop it, but we can at least put our best in it to try.”

The pride Watty shows in her work is a testament to how far she’s come.  “I’m not ashamed of who I was because it got me where I am today…I am very proud to represent our Tribe and state and so happy that the ‘Bead Your State’ became what it did because everyone that was involved worked very hard to put the entire project together.”