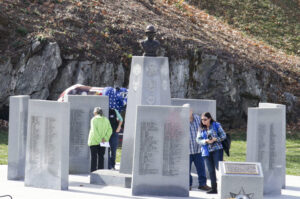 The Steve Youngdeer American Legion Post 143 is currently seeking the names of veterans, both living and deceased, for inclusion on the Cherokee Veterans Park Memorial honor wall.  The wall itself lists members of the Eastern Band of Cherokee Indians who have served in the U.S. Armed Forces in any branch.  So far, the listing of names submitted for 2020 which will be inscribed later this month includes: Jack Raymond Walkingstick, David Holland, Dale Edward Wolfe, Randall Scott Crowe, and Troy Duane Gleason.

Also, the name of Clarence Albert Murphy (USMC), who served aboard the USS North Carolina BB 55, in World War II will be added to the Memorial monument honoring those who were killed in action.  Murphy was mortally wounded in action on April 6, 1945, and he died as a result of his wounds on April 16.  He was buried at sea off the coast of Okinawa.