50 years ago, Leo James was just trying to find the best way to pay for his education.

He had been working at Cherokee as a teacher, but he was worried about his financial future. For three years prior, he had been in business partnership with Roger Shelton. At that time, when you could get an ice cream for a nickel, Shelton owned the Dairy Queen in Cherokee. By 1970, Shelton was ready to turn the business over to James.

“In 1970, we built a building up here on the river. It was a big barn building. Of course, I was a child. I didn’t know what I was doing,” James chuckled. 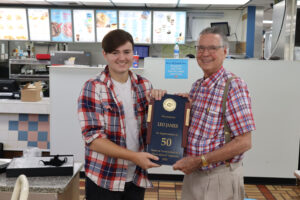 James and his wife, Sandra, have been running the business ever since. They have operated it, like most things in their life, with a family mindset. They have worked closely with family members in all of their businesses, especially the Dairy Queen.

“As far as we were concerned, it started off as a family affair. Sandra’s family, the Dunlap’s, they go back a hundred years or so in the area. Her mother and dad, sister, everyone helped get us started.”

It was a hectic beginning for the James’, as 1970 was more than just the start of their Dairy Queen ownership. That was the year that Leo began his graduate school courses. It also happened to be when their first son, Rollie, was born. They needed the support of their family, and it was paid forward from there.

As they grew older, the family continued to be heavily involved. The James’ had a second son, Chris. Both boys worked at the Dairy Queen at different points. Even today James’ grandson, Ethan, works at the restaurant when needed.

After 11 years operating the Dairy Queen, James decided it was time to add another business to his plate. In 1981, he opened Cherokee’s Pizza inn, which is about to celebrate 40 years. Once again, there was a familiar aspect of operation.

“Everybody cared about everybody and did what had to be done. My father-in-law was a Methodist minister, but he was an electronic genius. The first oven that we had was an electric oven at Pizza Inn. He and I, together, kept that thing running until I got rid of it,” said James.

“The first time that I got under that oven after he died, I cried. Because I’d never worked on it before without him.”

50 years has been a mark that James has thought about. He was very excited to get to this point, but he never envisioned how difficult that 50th year would be. Like every restaurant in the country, Dairy Queen has taken a major hit due to the COVID-19 pandemic.

“If it weren’t for the PPP and the Tribe…we probably wouldn’t have made the summer,” said James.  “It’s just, we’re running so far down. Fortunately, here, we have the drive-thru. But even with the drive-thru we’re running at about 40 percent down. The Pizza Inn is running like 70 percent down. Part of that is because we’re not open two days of the week. But still, that’s because of the virus, because we couldn’t get the help.”

This was yet another circumstance where family could help in even the most basic ways.

“I’ve worked here on and off,” said Ethan James.

A large part of James’ yearly staff is seasonal. The biggest part of that is the influx of international students that come in for college. Because of the pandemic, that wasn’t an option. Ethan James said that they have been down about 20 staff members over the summer.

“Well, when you say 20 people, the international students wanted to work as much as they could. So, we always worked them overtime. So, when we lose 20 internationals, hour-wise we’re losing 25-30 people,” said Leo James in response.

He and the staff have managed to level out at this time. With a reduced staff, they have had to rely again on family as well as long-time employees. One of those, who is seen as family at this point, is Manager Kay Garcia. She has worked at the Dairy Queen since 1992.

“Rollie, his oldest son, had called and asked me if I would work. I told him, ‘Two weeks! Because I hate that kind of work. I’ll give you two weeks, and that’s all.’ So, I’m still here. But it’s mostly because of them. They’re just like family, all of them,” said Garcia.

When things started to get unsettled with the spread of the virus, many of the staff began to worry about getting paid or having a place to work. Garcia said that she spoke with each of them and promised that they would be taken care of.

“You know you’re always going to have a place. I guess comforting is what you would say. It’s reassuring…I told them I’ve worked here 27 years, and I’ve never missed a paycheck.”

Leo James, even at 82, is still going strong. He has had a busy life and will continue to work both at his businesses and elsewhere. He consistently has several irons in the fire.

“I was on the school board in Jackson County, I’m a Trustee at Mars Hill University, I’m a member of the Foundation Board at SCC, a member of the Chamber of Commerce here in Cherokee. So, we haven’t just sat around and done business.”

He took over the Dairy Queen when he was still learning. He has seen four different buildings since working there. In this newer location up the river, you can see the history on the walls. Celebrating 30 years, 40, and trying to find space for another plaque.

“Next year is another year. We’re fortunate we’ve been here a long time,” said James.

“When we started moving up here from the river. And people saw that we were closed, and they saw that we were moving our equipment out and everything. People came to me and said, ‘what are you doing with our Dairy Queen.’ And that’s the highlight. The Dairy Queen belongs to Cherokee.”