APACHE, Okla. – Seven 8 Nine Dispensary had its grand opening on Saturday, Aug. 1 paired with a farmer’s market and a Patient Drive. Chavis Hix, daughter of Jim Panther and Terry Perdasofpy and a member of the Eastern Band of Cherokee Indians, has been in the business along with her husband Jesse for almost a year and recently opened Seven 8 Nine Dispensary in Apache, Okla. 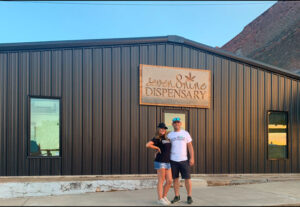 Chavis Hix, left, a member of the Eastern Band of Cherokee Indians, opened a marijuana dispensary recently, along with her husband Jesse. (Photo contributed)

“When we decided to have the patient drive with our grand opening, we would have never thought it would have been as busy as it was,” says Hix. “We are here for all the right reasons.

She further stated, “Over the past two decades, deaths from drug overdoses have become the leading cause of injury death in the United States. In 2011, 55 percent of drug overdose deaths were related to prescription medications; 75 percent of those deaths involved opiate painkillers.”

Hix commented, “Research shows that opiate-related deaths decreased by approximately 33 percent in 13 states following the legalization of medical marijuana in those states. As of this writing, 33 states have legalized marijuana for medical use, recreational use, or both. While there is still a stigma that surrounds marijuana use, it is quickly gaining acceptance in the medical community due to increased awareness of its proven benefits. In Oklahoma alone, over 313,000 patients have physician-issued ‘cannabis cards’ for legal use of marijuana products.”

“People use our products to help their symptoms in a more natural way,” Hix stated. “There is now a safer alternative to medicine. No more dangerous and highly addictive opioids to manage pain, or Xanax for those suffering from clinical anxiety. Natural CBD and marijuana products, such as topical rubs and lotions or infused gummies, almost instantly take away muscle and joint pain without the dangers of overdose and addiction.”

Hix said it is also a good revenue stream, “With gross sales estimated to be upwards of $300,000, it looks to be a good business to be in.”