EBCI and Franklin work together to promote Nikwasi’s history

FRANKLIN – Monday morning (Aug. 10) marked the groundbreaking for a new interpretive kiosk at the Nikwasi Mound site in Franklin.

The event was hosted by the Nikwasi Initiative, ‘a nonprofit dedicated to preserving the sense of place of the Nikwasi Mound’. The group was officially formed in 2015 and is a collaboration of community members in Franklin and Cherokee whose goal is to promote Cherokee culture in the area. Part of their efforts is to raise money and awareness for cultural sites like the Nikwasi and Cowee mounds. 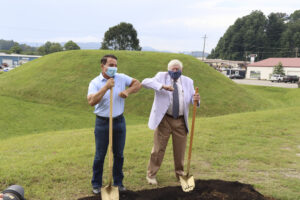 The Nikwasi Initiative is made up of members of the Eastern Band of Cherokee Indians, Franklin Town Council, Macon County officials, members of the Mainspring Conservation Trust, and members of the Cowee School Arts and Heritage Center. The current board includes Barbara McRae, Juanita Wilson, Hope Huskey, Bob McCollum, Benjamin Laseter, Stacy Guffey, and Kim Smith.

Last May, the Franklin Town Council voted unanimously to turn over the deed of the Nikwasi Mound to the Initiative. Some of those Town Council members attended the ceremony on Monday.

Co-Chair of the Nikwasi Initiative Juanita Wilson was the MC for the event. She talked about the importance of the day and how the this came to be.

“We decided to come together as a community was the thing to do. Talk about what our troubles were, talk about our concerns, talk about how we reconcile all of this,” said Wilson. 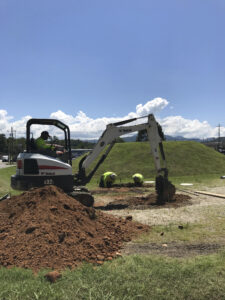 Work has begun at the site. (Photo by Elaine Eisenbraun)

After opening, she called upon Chief Sneed to speak on behalf of the Tribe.

“What we can do is acknowledge the past, acknowledge those things that were done that were wrong, and then choose to work together to forge the right path forward,” said Chief Sneed.  “I think that Nikwasi Initiative, the opportunity for the Eastern Band to work with our partners in Macon County to acquire lands that are historically sacred to the Cherokee people. And to set the path forward where it is acknowledged that these lands were sacred to our people. And that there are markers put forth for the generations coming after us to know what happened on these lands is so important.”

The topic throughout the ceremony was positivity and a focus on the future.

“This is a new era for Franklin. I think it’s a new beginning, and I’m delighted to be here today to take part in it. The kiosk is going to be absolutely beautiful. It’ll be what most of the tourists see when they come into Franklin,” said Mayor Scott. 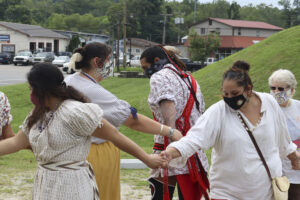 To close out the ceremony, the Atsila Anotasgi Cultural Keepers were brought up to tell Cherokee stories and to perform traditional dances. (JONAH LOSSIAH/One Feather photo)

Mayor Scott initially opposed the land transfer to the Nikawsi Initiative, stating in letters to the editor in the Macon County News that, “As Mayor of Franklin, my duty and loyalty is to the Town.  With that being said, I will be blunt.  Turning the Town’s Nikwasi deed over to the Nikwasi Initiative – in my opinion after 17 years’ service to Franklin’s Town Council – is not in the best interest of the town at this time” (The Macon County News, Letters to the Editor April 25, 2019).

Elain Eisenbraun, the executive director of the Nikwasi Initiative, has been one of the leaders organizing this collaborative movement between Franklin and Cherokee. She was brought into her position in May.

“We’re going to have the town and the EBCI breaking ground together, isn’t that amazing?” stated Eisenbraun.  “After centuries, literally, of tension. And here, maybe on this day, maybe today is the day at which we start to move forward and change things and build the vision a lot of different people have…we’ll all work together and come together to build something beautiful, honorable, and long-lasting.”

Eisenbraun said that the total budget for this kiosk was set at $75,000. Half of that was covered by the Cannon Foundation, which is a charity foundation based out of Concord. The remaining $35,000 was divided among the EBCI, the Town of Franklin, Macon County, and Duke Energy. She said that while she didn’t have the exact breakdown on numbers, she knew that the EBCI paid the largest share among those four entities. 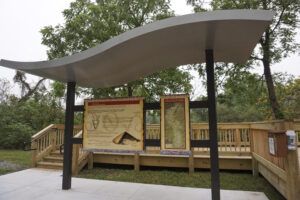 The kiosk that will be built at Nikwasi will be similar to this kiosk, which was situated by the Cowee Mound. (Photo courtesy of Mainspring Conservation Trust)

Ben Laseter, Director of the Mainspring Conservation Trust, an organization that has been active in facilitating discussions between interests in the Nikwasi Mound, commented, “Cannon Foundation funded this kiosk entirely. The tribal, town, and county have contributed funds for the NI partnership, CPF funds were also critical in the initial development, design, and implementation of the Cowee kiosk site, which is a model for other sites.”

To close out the ceremony, the Atsila Anotasgi Cultural Keepers were brought up to tell Cherokee stories and to perform traditional dances.

Work on the kiosk has begun and Eisenbraun said that the project should be done within a month’s time.