KITUWAH MOUND – The Cherokee Speakers Council held its monthly meeting on Thursday, July 30 at the Kituwah Mound site to decide upon matters regarding the Cherokee language and culture.

The first major area of discussion was how the Speakers Council wished to vet teachers of the Cherokee language. Several members of the Council were concerned with non-tribal members teaching the language. 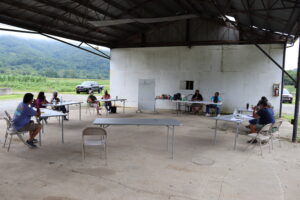 The Cherokee Speakers Council held its monthly meeting on Thursday, July 30 at the Kituwah Mound site to decide upon matters regarding the Cherokee language and culture. (JONAH LOSSIAH/One Feather photo)

They stated that if it is not regulated, false information could be spread. There was an example brought forth of a man teaching the language in Alabama. Another example was a community member charging for teaching services was brought up, saying that wasn’t right for them to be charging money and to be doing so without the consent. Council Vice Chair Wiggins Blackfox was adamant that they meet with all those that wish to teach the language to be the final judge.

Council Chairperson Roger Smoker established a subcommittee made up of members of the Council to establish the parameters and language for a resolution they will submit to Tribal Council.

Next, Council Administrator Bo Lossiah presented the Council’s 501-c3 application. He showed the forms to each member and asked if there were any changes that were requested. The Speakers Council passed the application unanimously, and Lossiah said that he could carry on with the process to earn nonprofit status.

The last significant topic was also presented by Lossiah, and that was an update on communication with the Atlanta Braves. He said that representatives from the Braves had been in contact with him and the Office of the Principal Chief, and that they wished to work directly with the Speakers Council to finalize a display of Cherokee culture on the Braves’ uniforms. Lossiah sent a statement back to the MLB organization with his position.

“The term Braves we grew to understand is what Europeans named our warriors,” said Lossiah.  “The term itself is not insulting. Modern natives, as we are, live in an integrated culture with the rest of the world through media – books, movies, music, etc. It’s hard to stomach some of the perceptions throughout our history. Still we’re amazed by some of the current presentations as what others conceive as natives. At times, we are told to understand that the caricatures are compliments. They were and are not compliments. And the longer we endure them, the worse the insult,”

“Caricatures are exaggerated symbols that should no longer exist. After all, our modern warriors no longer carry hatchets, tomahawks to chop. We have many modern heroes like Jim Thorpe and Charles George. Mr. George did not require a tomahawk to dive on a grenade to save his brothers in arms in World War II. Of course, he was brave. He was a warrior,” he continued.

“We have a rich history and culture. The overview is that we are happy to share for the education and goodwill to honor our neighbors. And, we expect the same. For that, the chop-chop chant must go. We would prefer no tomahawks, feathers, or indigenous characters. You can honor your baseball team and the city of Atlanta without those items. Without those items, we would be happy to assist.”

The Braves plan to have an alternate uniform that displays a word in Cherokee syllabary. They wish to have ‘Braves’ written in Cherokee, just replacing what is already on their uniform. However, Lossiah explained that there is not a direct translation for Braves as a noun in Cherokee. Bravery is something that would be assumed of a warrior, and so identifying an appropriate word could be difficult. There are several possibilities which the Speakers Council have brought forward, yet no consensus has been made at this time.

Lossiah passed around an example that the Braves had mocked-up with a provided Cherokee word. That word was anetsovsgi, and it is one of at least nine potential words that the Council will debate between. The example showed the word on t-shirts in two styles, as well as on the Braves playing uniform.

Chairperson Smoker established another subcommittee to continue discussion on this topic and to review the potential words.

The final item was to set the date for the next meeting on the Speakers Council. Under resolution they are set to meet every third Friday, but due to the current schedule of the EBCI they have set a date for Thursday, Aug. 20. Any items that are to be brought before the Speakers Council must be submitted by the second Friday of the month.