‘Being prepared is key’: CCS feeding students despite elongated closure

When N.C. Governor Roy Cooper ordered the closure of all public schools on March 14, the first question on a lot of minds was, ‘what about families that rely on school lunch?’ 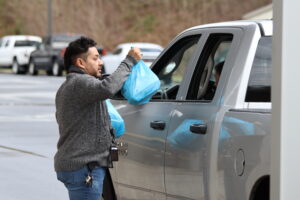 Immediately, calls were being made to see regulations on providing meals for those that needed it. Given that many parents would still be working, CCS knew that they would be needing to deliver if possible. Despite a hectic couple of days, they received the clearance needed and the first day of service was Tuesday, March 17.

“I think we started off with no expectations because we had no idea what it was going to look like. This is unprecedented in terms of what has happened to our community and the potential impact this virus might have on our community.” said Yona Wade, CCS director of community affairs.

“I’m very pleased with the amount of students we’ve had come through and even more so that we can provide the service to students who are not Cherokee Central School students. So, if they live in Swain or Jackson, or here on the Qualla boundary, they’re 18 or under, they can come and partake in the lunch distribution we’re doing here,” said Wade.

On day one, they managed to serve 327 students, and it just grew from there. They have now been running this distribution for three weeks, and the most recent week tallied 5,653 meals out the door. The distribution runs from 11 a.m. until 1 p.m. Monday through Thursday, and it offers lunch as well as breakfast for the following morning.

“The first thing I thought about were these kids, and about making sure they get fed,” said Tammy Parris, the CCS nutrition director.  “I got the waiver from the state so I could feed them. Because that’s what I worry about, is the kids. That’s my job.” 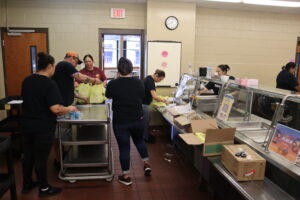 Tammy Parris (in the maroon shirt), CCS nutrition director, and her staff work to push out thousands of meals every week.

Parris and her staff are working all morning to make sure there are plenty of meals for who needs it. In the beginnings of the service, they made sure to prepare the food that is safe to refreeze. Because of the sudden nature of the event, there was no telling just how many kids would show up in the first few days, and they wanted to minimize food waste.

“My staff has been awesome. They have worked hard; they came in and haven’t complained about nothing. They’ve done really well,” said Parris.

The school has received donations of bags and other supplies from Food Lion and other local stores insure there were more than enough to package.

CCS is also offering food delivery to specific families that sign up. This service was incorporated to offer a solution to parents who are still working during this time and have no one that can pick up the meal at the allotted time.

Minutes before the first day of distribution, CCS received word that they could offer these meals to any student under the age of 18 and not just their own. They have been reaching out to everyone in the community to make sure these services are available to anyone that needs them.

“Being prepared is key,” said Wade.  “So, when they tell you to prepare, you prepare. There’s no reason we should be second guessing. We’re hearing what may be coming or not. Whether it’s here or not, you should still prepare like it is. Having plans in place prior to this event really helped to have us ready. We had the homework packs going out on Friday, found out school was closed on Saturday. So, we’re in a good place for our students here at Cherokee Central Schools.”

CCS Superintendent Michael Murray said that it has been a pleasure to offer this service, as well as to find every possible way to assist their students and families.

“We talk school family all the time. When you are school family, every member of your family not only has potential, you empower them to do their job and then you get out of their way. So, at this point I’m not micromanaging some seriously talented team members, and they are shining because they are doing what they do best,” said Murray.

“Yona and Tammy Parris have done a tremendous job on a very short notice, and we’ve got that thing rolling out almost seamlessly. I’m very proud of that,” continued Murray.

With all North Carolina public schools closed until at least May 15, the immediate future is currently uncertain. The state is already taking measures to adapt to these circumstances. On Friday, March 27 the North Carolina Board of Education approved changes that dropped traditional grading for high school seniors. Instead, they decided to pass high school seniors if they had passing grades as of March 13, the last day they were in school.

CCS has more plans to facilitate education during this critical time, including WiFi options and more packets for students. There will most likely be more changes in the coming days, but the staff at CCS says they are ready.