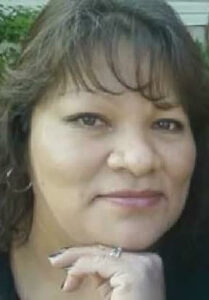 Valencia Lee Cucumber Pheasant, known by friends and family as Val, passed away on March 26, 2020. Born on Dec. 9, 1969 in Cherokee, she is the daughter of the late Virginia Lee Ledford Blythe and Thomas J. Owl.

In addition to her parents, she is also preceded in death by her granddaughter, Alannah Tyi Ledford.

Val lived with her husband Phillip in the Birdtown Community. She loved planting, riding motorcycles and traveling to car shows with her husband. She enjoyed collecting Native American handmade crafts, especially baskets. If you knew her, you knew about her love of Metallica.

Val will be escorted from Long House Funeral Home on Sunday, March 29 at 3 p.m. by her biker friends for one final ride on her way to her visitation which will take place at her late mother-in-law’s home in the Big Cove Community. Val will remain at the home for visitation until her internment on Monday, March 30 at 2 p.m. at the Upper Pheasant Family Cemetery.  Pallbearers will be Calloway Ledford Jr., Brian Matthews, Scott Cooper, Timmy Ray Smith, Duck Lossiah, and B Burgess.