Tori Teesateskie, a member of the Eastern Band of Cherokee Indians, has been named a NCCAA (National Christian College Athletic Association) DII Third Team All-American.  Last month, she was also named to the NCCAA Mideast All-Region Team.  Teesateskie, who plays for the Johnson University (Tenn.) Lady Royals, was the only freshman named to both lists. 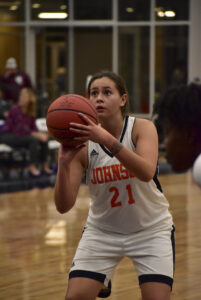 “First off, I would say that I am truly honored to receive this award,” said Teesateskie.  “Putting things into perspective for the upcoming years is that my work ethic has to continue in the off-season.  My ability to achieve a higher level of success from what I have accomplished this year will depend on it.  I have been truly blessed for the opportunity to continue to play a sport I fell in love with when I was 6-years-old.  Never in my wildest dreams did I ever imagine I would one day become an All-American athlete.”

Speaking of Teesateskie’s work ethic, Caylee Braziel, Lady Royals head coach, previously told the One Feather, “She is an incredible worker.  She stays in the gym and keeps working, goes after it.  She’s the first one there.  I’ve seen her kick into even higher gear as the year’s gone on which is just incredible.  Tori is the kind of player that is so composed, so even-keeled; which really brings consistency.  Part of what makes her so good is she is so consistent.”

The full listings of NCCAA DII Women’s Basketball All-Americans is as follows: