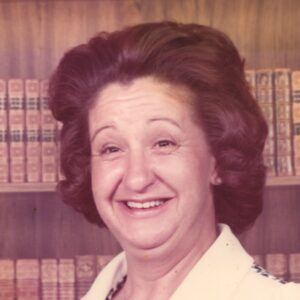 Phyllis Coons made her journey to her Heavenly home on March 17, 2020. She was born on the May 24, 1934 to Ted and Mildred Rose at a time when her hometown of Cherokee was just a tiny village with only a single, two-lane paved road, no sidewalks, stoplights or streetlights. A trip to neighboring Bryson City required a plan and a trip to Sylva or Asheville was an adventure that required a serious plan.

She is preceded by her husband, Carroll, who passed in 1997 and her son, Dennis, who passed in 2013.  She is survived by her son, Carroll Jr.; and her daughter, Michelle; in addition to granddaughters, Rebel (daughter of Michelle) and Leeann (daughter of Dennis).  She also has three great-grandchildren from Leeann – Austin, Zachary and Vivian.

She had four brothers (Don, Dale, Theodore, and Ray) and six sisters ( Alice, Mary, Nancy, Brenda, Linda, and Vivian). She walked two miles to the government boarding school each Monday and as the oldest girl, helped her older brother Don lead their younger brothers and sisters there once they became old enough for school. She grew up in a two bedroom cabin where the guys all slept in one room and the girls in the other. There was no electricity at the time so lights were from kerosene lamps and candles. There was no indoor plumbing other than cold water from a spring and the most anticipated entertainment was The Grand Old Opry on Saturday nights via a battery powered radio. This was life for practically everyone in Cherokee at that time.

Her husband, Carroll, and her brother, Don, were best friends who met in the Air Force and she met him in 1952 when Don brought him along on a visit back to Cherokee. They married on January 4, 1953 and she began her long journey from her little mountain village into the great outside world. She made homes in over a dozen different states and in England and raised three children – Carroll Jr., Dennis, and Michelle. While living in England she visited most of the countries of Europe. Oftentimes, she was on her own with her children due to military requirements taking her husband off to far away places but she was always up to those challenges. She and Carroll retired back to Cherokee in 1976 and lived here ever since.

She was successfully treated for cancer of the larynx in 2010, but the radiation treatments unfortunately destroyed her saliva glands severely limiting what she was able to eat. Possibly as a result, she had been very gradually experiencing a decline in strength and health. She had made it known that she was completely ready to go and rejoin everyone who had gone on before her and passed quietly in her sleep in the early morning hours of March 17. She will be greatly missed but we all wish her well on this next part of her journey.

Visitation and Funeral Services will be at Long House Funeral Home on March 19 from 5 p.m. to 7 p.m.

**Due to Government mandates in response to the CO-VID19 pandemic, we must limit view to 10 people at a time. We are committed to helping families through this difficult time n their world and ours. We will have hand sanitization stations set up upon entrance and exit. Only 10 people will be allowed into the Chapel to pay their final respects at a time. We appreciate your understanding. **