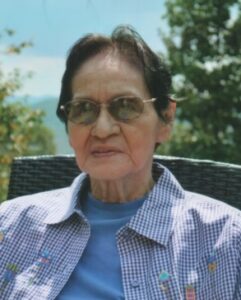 Lucille Sequoyah Owens, 90, of Robbinsville, went home to be with the Lord on Friday, March 13, 2020 at Graham Healthcare and Rehabilitation.

She was the daughter of the late Ammons and Kina Ledford Sequoyah.  In addition to her parents, she was preceded in death by her brothers, James Sequayah, Sr., and Ammons Sequoyah, Jr.; her sisters, Harriett James, Sara Biello, and Jesse Sequoyah; and her husbands, Jesse Crowe, Jewell Postell and Earl Owens.

Townson-Smith Funeral Home is honored to be serving the Owens family.   An online register is available at www.townson-smithfuneralhome.com.