The coronavirus, COVID-19, has sparked a wave of event cancellations and postponements in Cherokee, statewide, and nationwide.  North Carolina Governor Roy Cooper declared a State of Emergency on Tuesday, March 10 stating, “The health and safety of North Carolinians is our top priority.  We are taking the necessary steps to ensure that North Carolina is prepared and responding to this virus…time is a valuable resource and we must work together to slow the spread while we can.” 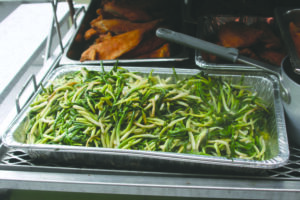 The annual Rainbows and Ramps Festival, along with many other events, has been cancelled this year due to the spread of coronavirus. (SCOTT MCKIE B.P./One Feather photo)

A memo from the Office of Principal Chief Richard G. Sneed, on March 12, put a halt to all tribally-funded travel for the immediate future and further stated, “Due to an overabundance of caution and in the interest of keeping our community members safe, it is being recommended that any EBCI-sponsored events and trainings happening in the months of March and April be postponed.  A determination will be made for future gatherings by April 20.”

Following is a listing of events planned in Cherokee that have either been postponed or cancelled as of press time:

Tribal officials related that, as of press time, all events planned for the month of May are still on.  EBCI Public Health and Human Services (PHHS) officials will re-evaluate the spread of the virus in mid-April to make a determination about May events.

The USET SPF (United South and Eastern Tribes Sovereignty Protection Fund) Impact Week meeting set for March 16-19 in Washington, D.C. has been cancelled.  “Due to rapidly increasing concerns related to the Coronavirus (COVID-19) outbreak, as of this communication, over 50 percent of our tribal nation members have notified us that they have issued travel bans, restrictions, and/or are liberally approving staff requests to not travel at this time,” USET officials said in a statement.  “As previously communicated, the health and wellness of our members and meeting participants is of top priority concern.  With over half of our membership notifying us that they will not be in attendance, we will not be able to conduct our business, and therefore it makes no sense to have others travel in and jeopardize their wellness unnecessarily.”

Many educational institutions are cancelling or postponing events and altering classes with many colleges and universities opting for online-only classes instead of face-to-face classes.  Western Carolina University (WCU) announced on March 11 that it is extending its spring break by a week.  In a statement, WCU officials noted, “This additional week will help enable faculty members to take the steps necessary to make the transition from in-person classes to delivery of their course materials online or via other distance methods that do not require face-to-face classes.”

WCU officials said their decision came from guidelines received from the University of North Carolina system.  WCU’s statement said, “…all UNC institutions are restricted from hosting gatherings of 100 or more people.  As a result, the chancellor’s installation ceremony scheduled for Friday, March 27, and other installation week activities are postponed until further notice.”

Numerous pow wows, round dances, and other Native American gatherings have been cancelled or postponed all throughout Indian Country.  Two of the largest and most well-known pow wows, Gathering of Nations Pow Wow in New Mexico and the Denver March Pow Wow in Colorado, have both opted to postpone their events.  The Denver March Pow Wow Committee released a statement on March 11 stating in part, “This is not an easy decision, but with the announcement from the World Health Organization (WHO) deeming Covid19 a pandemic and our concern from the health and safety of all of our participants, vendors, and attendees, including a large number of our elders, we feel it is best to postpone and look for other dates later in the year.”

The NCHSAA (North Carolina High School Athletic Association) announced on March 12 that the Board of Directors moved to suspend all interscholastic athletics in the state from March 13 through at least April 6.  This move affected the high school state basketball championship games originally scheduled for March 14.  Those games are postponed indefinitely per NCHSAA officials.

Que Tucker, NCHSAA commissioner, commented, “As much as we would like this opportunity for our student-athletes, coaches, and their communities, we know that ultimately any decision we make must err on the side of caution.”

NCAA officials released the following statement on the afternoon of March 12, “Today, NCAA President Mark Emmert and the Board of Governors cancelled the Division I men’s and women’s 2020 basketball tournaments, as well as all remaining winter and spring NCAA championships.  This decision is based on the evolving COVID-19 public health threat, our ability to ensure the events do not contribute to the spread of the pandemic, and the impracticality of hosting such events at any time during this academic year given ongoing decisions by other entities.”

ACC league officials said in a statement on March 12, “We are disappointed for our student-athletes, schools, and fans to have to make this decision; however, the overall health and safety of all involved is the priority.”

The National Lacrosse League (NLL), which includes the Georgia Swarm, announced a temporary suspension of play on March 12.  “We will continue to evaluate this situation and remain in constant communication with health, team, business, and league officials across North America.  Security and safety are our top priorities and focus in these challenging and unprecedented times, and we will continue to provide updates on resumption and rescheduling of play as they are determined.”

Follow the Cherokee One Feather on Facebook for daily updates on new cancellations/postponements as well as the latest COVID-19 information as it relates to the EBCI.