Galaxy Cheer bringing the sport of cheerleading to the forefront 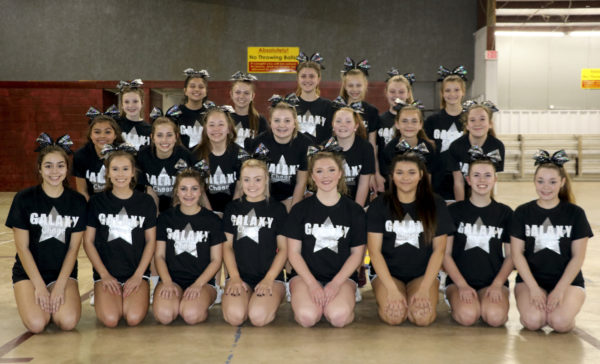 BRYSON CITY – The Swain County Rec. Dept. was filled with the sounds of cheers and the sights of choreographed dances and stunts on the evening of Tuesday, March 10.  The newly-formed Galaxy Cheer competition cheerleading squad was hard at work. 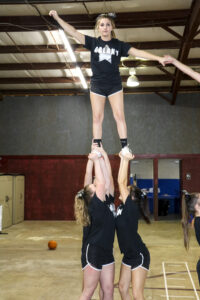 The squad, who was only in their third practice as a unit, have several competitions upcoming including: Spirit Solutions competition in Asheville on March 28 and the Maximum Cheer and Dance competition in Myrtle Beach in May.

She said physical fitness is an important part of the sport. “You obviously have to be in good shape and able to lift other people.  I think a lot of people look at cheerleading and think it is cute, fun and games, but the girls come out here and are lifting a human and catching people.”

Cheerleading is most definitely a sport – a fact that Coach Wike and the team members feel passionately about.

“I don’t think people think about the intensity of all of our practices and games,” said Wike.  “Even though we’re on the sideline, we’re throwing girls in the air, sacrificing our bodies on the ground for these girls.  Without these girls lifting and practicing, it wouldn’t happen.  When people hear ‘competition’, they consider it a sport.  But, even high school sideline and high school basketball cheer, I consider that a sport.  We practice just as hard as every other sport, if not more.” 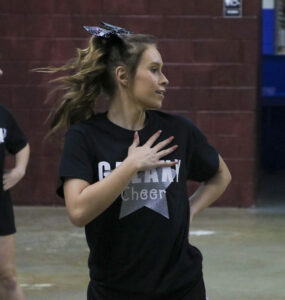 The team is a mixture of girls from various ethnic and cultural backgrounds and different schools, but there are several things they all have in common including great work ethics, positive attitudes, and a camaraderie and desire to work with each other on their team goals.

“I like stunting and being with my friends because I like making friendships,” said Karly Donaldson, a senior at Swain County High School.  “Definitely competitive cheerleading is a sport because we put in a lot of work, a lot of practice time and hours.”

Tsini McCoy, a member of the Eastern Band of Cherokee Indians (EBCI) and a freshman at Swain County High School, commented, “I love stunts so much.” 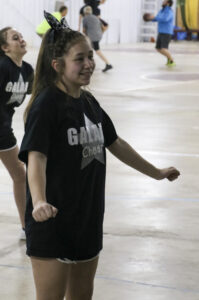 McCoy said there are differences between a competition cheer squad and her regular school squad.  “It’s faster.  There’s more movement and more stunts.”

Mattie Maney, an EBCI first descendant and a junior at Cherokee High School, is a base for the stunts paired with McCoy.  “You kind of have to be in one mind and you have to be accountable.  You basically have a life in your hands so you have to be very accountable.”

She added that stunts are very physical and take a lot of work and effort.  “I would definitely consider competition cheer to be a sport.  We put in the same work as the other sports.  It’s a lot of work and conditioning.” 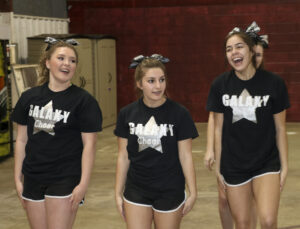 Aiyanna Toineeta, an EBCI tribal member and a freshman at Swain County High School, has been involved in cheerleading since she was 5-years-old and said her favorite part is the stunting as well.  “I feel like it is a sport.  We work out like other sports do.”

Emma Wolfe, an EBCI tribal member and a junior at Cherokee High School, has been cheering since she was 7-years-old and noted, “I like meeting new people.  It’s fun cheering with people who aren’t from my school.”

When asked what advice she would give to the youth cheerleaders, Wolfe commented, “I would tell them it’s really hard, but you just have to keep going.  Some days, you have off days and just don’t always hit it.”

Galaxy Cheer will have their next round of try-outs in May at Pirouette’s Dance Academy in Bryson City.  For more information on the team or upcoming try-outs, call Pirouette’s at 557-2948.