Several students at New Kituwah Academy have been named semi-finalists in the North Carolina Dept. of Transportation (NCDOT) Aviation Art Contest.  This year’s contest, sponsored by the NCDOT Division of Aviation and the North Carolina Airports Association, has the theme of “Flying Yesterday and Tomorrow”. 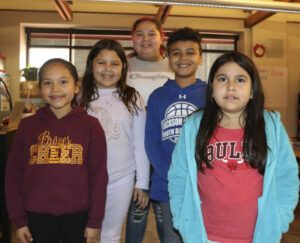 “I thought of a carpet with balloons because I had two ideas – one with a flying carpet and one where balloons are tied to my hands and I’m flying up,” said Toineeta.  “I decided to put balloons on the carpet so it would give it more lift.”

Staton said, “Mine was about a big ship with fireworks all around it and a beautiful galaxy in the background, and you can see little people inside of it.”

When asked his inspiration, he noted, “I watch a lot of movies that have rocket ships in them, and I just decided to draw one.”

Littlejohn said, “I wanted to bring something back from the time when they used hot air balloons and also bring someone from the future to see what things are like now.  That gave me an idea to mix the future and the past together.”

Hernandez drew an astronaut girl along with the planet Saturn and a sunset that she made using turquoise, pinks, and purples.  She flicked white paint throughout the piece to resemble stars.  When asked her motivation, she noted, “I just wanted to follow my dreams.”

The students compete with students across the state, and the top three works in each age division (junior, intermediate, and senior) will go to the national competition.