The newly-instituted Cherokee Speakers Council has been meeting for several months and is taking the steps to solidify their role. 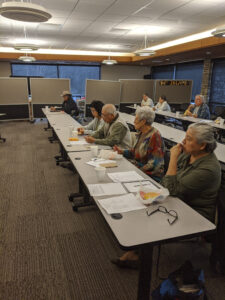 The newly-instituted Cherokee Speakers Council has been meeting for several months and is taking the steps to solidify their role. (Photos contributed)

The goal of the Speakers Council is to “be the primary representation of the Eastern Band of the Cherokees on all matter regarding language, translations, traditions and culture”.

Their meetings are almost entirely held in the Cherokee language and is made up of mostly fluent speakers. There two members on the Council that do not consider themselves fluent, but fully conversational in the language.

All fluent speakers will be accepted as members of the Council, and officer positions will be elected every two years. The following members have been elected into positions:

“We get a lot of information from the other speakers -what the needs are. The main focus is producing speakers,” said Roger Smoker. 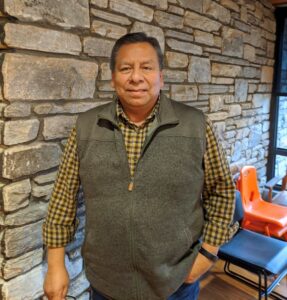 Roger Smoker, an elder of the Eastern Band of Cherokee Indians and a fluent Cherokee speaker, has been selected as the chairman of the Cherokee Speakers Council.

The by-laws for the Council are currently under review. Reportedly, there are a few modifications and amendments that are in motion. Lossiah took charge of forming the by-laws and also submitted the initial resolution to form the organization to Tribal Council.

To meet with the Speakers Council or present information to them, the deadline to request time is the second Friday of each month. They meet on the third Friday of every month at 9 a.m.

The new process for an official translation request will also go through this Speakers Council. There are forms that will soon be available to the public that must be submitted by the same second Friday deadline.

Carolyn Bird said that as much as she enjoys people wanting to learn the language, she says that it’s just as important that people go about it the right way.

“If you want to learn, it’s got to come from deep down. That you really want to learn. It’s just not the money out there. Right now, I think that’s the biggest part. ‘Well how much money will I get? How much am I going to get paid?’ That’s not what Cherokee’s about. Not to me.”

Bird and the other members also said that they understand small compensation for teachers and the like, but that money should not be the motivation for learning. They said that programs that would allow tribal employees to learn during work hours is another option, but again that paying stipends for attending classes seems wrong.

Each member of the Council is dedicated to preserving the language, and they say that getting the speakers in one room will be very beneficial moving forward.

“This is our language,” said Marie Junaluska.  “We’re Cherokee, we should know how to speak it. What it’s all about. And I think there are a lot of people realizing that. I’ve noticed a lot of parents and a lot of tribal members are coming forward now to try to learn.”