“Sleepy Hollow” hits the mark for year one

“The Sleepy Hollow Experience” capped off a successful debut year in Cherokee on Sunday, Nov. 3 after running 24 shows.

The Cherokee Historical Association (CHA) was responsible for bringing in the act, and the show was led by its director and producer Brian Clowdus. This was the first time Clowdus had worked in Cherokee.

According to John Tissue, the executive director of the CHA, the production cost was about $85,000, much of which Clowdus fronted himself. Due to the nature of Clowdus’ expenditures, he was provided with 80 percent of the ticket revenue. Tissue says the CHA made a profit of approximately $15,000 – $7,500 from the ticket sales and the other half from concessions. He says that the shows outperformed his expectations of breaking even or a minimal profit. 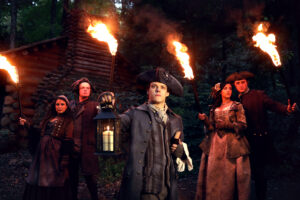 “We made about 15,000, which isn’t a whole lot, but a first-year is really good. And next year, the split gets a little more in our favor,” said Tissue.

Over the three weekends, 3,754 individuals came out to the show. Attendance was consistent across each weekend, and the largest output was 1,391 on the second weekend. The lowest turnout came at the 9 p.m. shows. These late performances had 72 percent less attendance than the 7 p.m. It’s one of the things that Tissue says he learned for running the shows for next year.

“We will probably keep the first week about the same, but I don’t know if we’ll have as many late-night shows just because there wasn’t the draw…that’ll save us some cost on some overhead too.”

“This is certainly much more interactive. We compress the audience into the first 12 rows or something in order to make sure it was a very intimate kind of setting. We limited seating to 500 per show also. And the actors are kind of scrolling around and running through the house, so I think that that was new for our audience.”

He also said that when you consider the size of the show and that it was in its first year, the success was comparable to other productions they put on.

Tissue says that the CHA enjoyed working with Clowdus and that they are looking forward to growing the relationship.

“He was great. I mean, he’s an expert on how this works, and we are the fourth ‘Sleepy Hollow’…he knows what he’s doing. He’s got it down to a science. We appreciated all his expertise.”

Lakyn Lewis, the stage manager for Brian Clowdus Experiences, says that she had a wonderful time in Cherokee and that Clowdus was thrilled by the outcome of the production.

“He was overwhelmingly touched by the community response and the community willingness to try something new. He really was just overjoyed about how welcoming everybody was, and really felt like at home. And he said he’s excited for future projects and really looking forward to hopefully being back there soon,” said Lewis.

Tissue says that he fully expects to have the “Sleepy Hollow Experience” back for a second run of shows in 2020. He says that he is hopeful that after working through the first attempt, they can come back even stronger next year.

“I think that we will definitely see attendance grow,” said Tissue.  “Because we didn’t really have anyone complain about the show or give us any negative feedback. And I think that we will probably expand our offering as far as the retail. We didn’t really do much retail. I think we had blankets and seat cushions up there, and ponchos unfortunately because of the rain. But, we will probably brand some merchandise for the show next year.”

He says that he is still maintaining his expectations moving forward but is also excited to see how this can grow.

“I foresee maybe a three-year lifespan, but that could woefully wrong. I’m a conservative kind of guy on the business side. I want to make sure that we don’t just continue doing the same old thing forever. But I could totally see if we do “Sleepy Hollow” for three years, in the fourth year doing something else Brian produces.”

Tissue said that he knew a new show like this could be risky, and so they wanted to help their odds of success by bringing in a professional.

“That’s actually why we brought in Brian. Because he’s successful at doing this kind of thing, and he brought his success with him. And he’s teaching us how to do it. ”

Tissue says there is still plenty to discuss before solidifying decisions for next year. However, the next step for the CHA is looking to fill a Spring show. Tissue is hoping that with the success of Sleepy Hollow, they can have a consistent Fall show moving forward. Unto These Hills will continue to run throughout the Summer, and a Spring show would offer continuous entertainment for most of the year.