The Lady Braves varsity basketball season begins on Friday, Nov. 22 at Asheville Christian Academy. They will start their season away from home for their first two games, with the second coming at Robbinsville on Tuesday, Dec. 3.

Head Coach Keith Pinnix is back at the helm for Cherokee. Pinnix was the coach of the 1995-96 team that won the program’s lone state championship. He says that though it has been a few years, he’s loved being back. 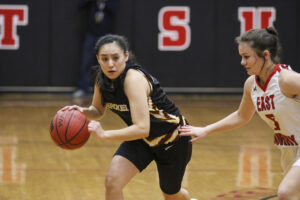 Cherokee’s Raylen Bark (#1) brings the ball up the court during the Sectional Finals at East Surry in March. As a senior, she will help anchor a Lady Braves team for the 2019-20 campaign. (SCOTT MCKIE B.P./One Feather photo)

“Some days it’s almost like I hadn’t stepped out of it. So, that’s been pretty exciting. The tough part is getting everything put back in and making sure the kids know what our expectations are. I’ve been real pleased with our coaching staff that I have surrounding us, we have a lot of good people,” said Pinnix.

He’s always enjoyed speed on offense and getting out quickly after a rebound. Though they need to iron out some of the kinks, he says that he wishes to pick up with a similar gameplan that he held before.

“My style is not really changing much. Thank goodness we got the talent and the kids that can do it. We’ve always wanted to fast break, wanted to press. So, I don’t see that changing much.”

He said that has some good ballhandlers and expects the returning players to lead by example. There is time to adjust throughout the season, but Pinnix says there have already been some quality steps taking by his team.

“We’ve had some good practices and we’ve had two good scrimmages (against Asheville High and TC Roberson)…the kids have shown a lot of improvement. We’re excited about what we have and where we’re heading.”

It’s not uncommon for a change of coaching to have a negative effect early on, but Pinnix says the girls have worked well with program. He says that his players are not an overall vocal bunch, but that they lead by example on the floor. With the start of the season just around the corner, he says that he is ready to embrace all it has to offer.

“Just getting back into the competition. The challenges we have in front of us. That and getting the kids to learn the program. Like I said, we’re starting over with that. We got 30 kids in our program, 15 JV and 15 varsity. Getting them all running the same thing, so that we have continuity from one year to the next for those that move up. That’s going to be the biggest challenge. The process. ”

It is difficult to say how everything will lay out in front of Cherokee, but Pinnix says that he is confident in his team’s capabilities.

“The kids have accepted the changes. I think they’re excited about it and looking forward to it … The expectations are going to be in first. That’s what our goal is.”