Less than 0.25 percent of dentists in the United States are Native American, and one member of the Eastern Band of Cherokee Indians (EBCI) recently took a step towards increasing that number.  Keyonah Lambert, an EBCI tribal member from the Yellowhill Community, received her white coat during a recent ceremony at the East Carolina University (ECU) School of Dental Medicine. 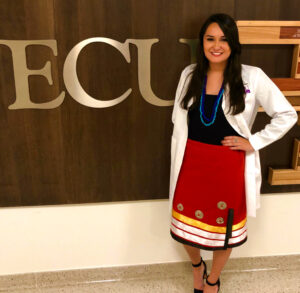 Keyonah Lambert, an EBCI tribal member from the Yellowhill Community, received her white coat during a recent ceremony at the East Carolina University (ECU) School of Dental Medicine. (Photo contributed)

“Dental school is a four-year doctorate program,” said Lambert, “and the ceremony signifies that I have successfully completed all of the necessary pre-clinical work and am now ready to start seeing real patients in clinic for the remaining two-and-a-half years of dental school until I graduate in 2022”

According to an article entitled “The American Indian and Alaska Native dentist workforce in the United States”, published in the Journal of Public Health Dentistry in Spring 2017, “AI/AN (American Indian/Alaska Native) dentists provide a disproportionate share of care for AI/AN populations, yet the number of AI/AN dentists would need to increase 7.4-fold in order to meet population parity”.

Lambert commented, “There are currently about 200,000 practicing dentists in the U.S., but less than 500 of those are Indigenous dentists.  This lack of representation in healthcare is disturbing but something that I’m proud to soon be fully contributing to in the community.”

She added, “The lack of diversity and Indigenous representation in dentistry is sadly something that we see within all fields of healthcare and even though I’m just one person, I’m so honored and excited to soon be contributing to those numbers. As I began my journey to dental school, I had very little guidance or knowledge about what the process entailed and often felt scared and doubtful of if I could even succeed at this.  So, I knew once I was admitted to dental school that I would make it my mission to support and encourage other Indigenous youth interested in medicine. I look forward to one day being a role model and mentor to the future Indigenous dentists that will come after me.”

Lambert graduated from Western Carolina University in 2016 with a degree in Pre-Dentistry.  “For as long as I can remember, a career in medicine has always been on my mind. Growing up I would often hear from my grandparents and parents how so many people had made them feel like higher education was unattainable or inaccessible to them. They would always repeat how they wanted more for me and how important it was that whatever career I chose that I return back to our people because no other practitioner will understand and provide care for our people better than one of our own Indigenous members.”

This support inspired her, “The more I heard this, the more determined I became to achieve my dreams. However, it wasn’t until I took a class on health disparities in Indigenous populations during college that I specifically decided on dentistry. In that class I became aware that Indigenous communities suffer from one of the highest rates of poor oral health when compared to other populations in the United States primarily due to lack of access to dental care in their area. After shadowing at the Cherokee Dental Clinic and witnessing procedures for myself, I became certain that this was the career for me.”

Her journey towards becoming a dentist has been hard, but she perseveres. “The past year and a half has been one of the toughest of my life full of weekly tests, skills assessments, and long nights of practicing in the simulation lab. I’ve done so many things that I never imagined I would be able to do, much less be able to do well. But every time I felt like quitting, I thought about the extreme importance and power of being cared for by someone who looks like you.”

Lambert is looking forward to working for her people and she appreciates all of their support. “Indigenous people deserve great doctors who not only provide the best healthcare but also can understand and relate to them culturally. I would like to say thank you to the community for all of the continuous support I receive. I am so grateful to everyone who has sent me kind messages and everyone who checks in on me. To all of the Indigenous youth out there still dreaming their big dreams, keep dreaming and working hard. Our people need us and our accomplishments are all for them.”

In the end, she said being a dentist will allow her to help people – something she is very committed to. “Not only do dentists get to heal, but they also can take away pain and allow you to leave with a beautiful smile.”