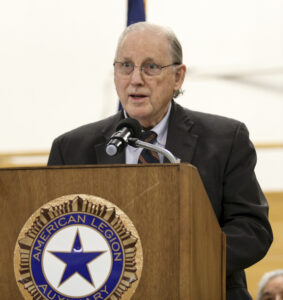 “This Veteran’s Day, we commemorate the service that you ladies and gentlemen have given to our country,” said Lew Harding, Post 143 Commander, as he opened Monday’s event.  “We’re so proud and we’re so grateful.”

He went on to say that veterans served for “the purpose of sacrifice and tolerance, of bravery and of discipline – the foundation stones of which our great country was built.  Thank you to all the veterans, each and every one of you here.  You are our heroes.  We love you and we appreciate you, and we will never, ever forget what you have done for us.”

Chief Sneed, a Marine Corps veteran, was the keynote speaker for the event and thanked all of the veterans for their service.  His speech centered on the concepts of liberty and honor.  “Liberty and honor, hope and freedom – these are powerful words that resonate at a visceral level within the heart of every human being.”

He said that liberty should never be taken for granted.  “There are, however, amongst us those who are the keepers of the flame of liberty, those who understand the eternal value of this precious gift that we have been entrusted with.  These are the warriors of our society.  Not tyrants who wish to impose their will upon the weak, but selfless warriors who willingly place themselves in harm’s way that others might enjoy the opportunities that are afforded to those who have freedom.”

Chief Sneed said veterans are selfless.  “They do not seek praise for themselves.  They do not wish to shine a light on their heroic actions.  When honor is bestowed upon them, they simply reply, ‘I was only doing my duty’.” 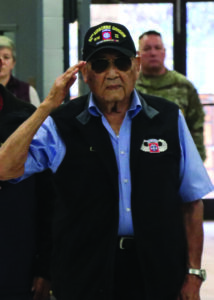 PFC Reuben Taylor, an elder of the Eastern Band of Cherokee Indians, salutes during the “Star Spangled Banner”. He served in the 82nd Airborne Division in World War II and fought in the Battle of the Bulge. PFC Taylor was awarded the Purple Heart and a Bronze Star for his service.

Following the speech, Col. (Ret.) Bob Blankenship read the following list of names of EBCI tribal members killed in action as Legionnaire Phyllis Shell rang a bell in their memory:

The Cherokee High School JROTC Color Guard posted the colors at the beginning of the event and provided a 21-gun salute at the its conclusion.  Legionnaire Shell sang two songs at the event including closing with “God Bless America”.