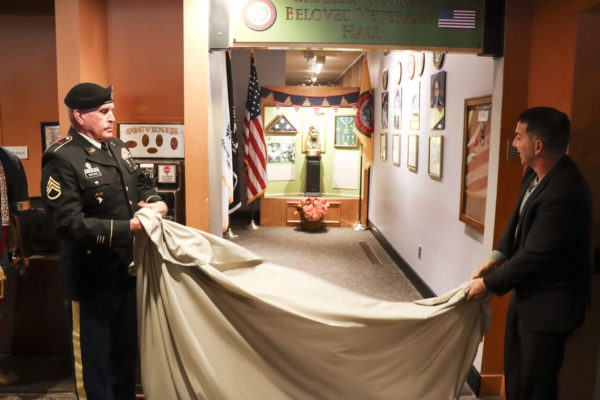 PFC Charles George, a member of the Eastern Band of Cherokee Indians (EBCI), received the Medal of Honor posthumously after throwing himself on a grenade to save two fellow soldiers during the Korean War.  He passed away from his injuries on Nov. 30, 1952 near Songnae-dong, Korea.  The Museum of the Cherokee Indian honored his legacy and heroism by officially dedicating the Charles George Beloved Veterans Hall on the morning of Monday, Nov. 11.

In addition to a display honoring PFC George, the Hall contains memorial displays for four EBCI Beloved Men and Women who were veterans including: Lula Owl Gloyne, a 2nd Lieutenant in the U.S. Army Nurse Corps in World War I; Jerry Wolfe, a U.S. Navy veteran who was part of the Normandy Invasion in World War II; former Principal Chief Robert S. Youngdeer, a Marine Corps and Army veteran who was wounded in World War II and received the Purple Heart; and Lt. Col. Kina Swayney, the highest ranking EBCI woman in the Tribe’s history. 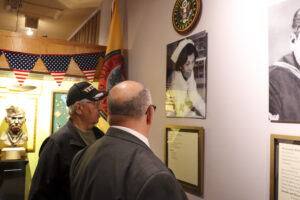 Wilbur Paul, left, a member of the Blackfeet Nation of Montana, looks at the exhibits in the new Veterans Hall along with Big Cove Rep. Perry Shell. Both are veterans of the U.S. Armed Forces.

“The four Beloved Men and Women, all veterans of the United States Armed Forces, honorably served,” said Staff Sgt. (Ret.) Warren Dupree of the Steve Youngdeer American Legion Post 143.  “Once they separated from active duty, they returned home to continue that service in their community.  They took their lives, both military and civilian professional lives, to an extremely high level.  They were and are true role models for our youth.”

Principal Chief Richard G. Sneed, a Marine Corps veteran, unveiled the new Hall along with Dupree.  Prior to the official opening, Chief Sneed commented that it is very fitting that the Museum honor the individuals highlighted in the display for their service to the country, the Tribe, and their fellow man.

“The role they fulfilled in shaping our culture within our Tribe cannot be understated,” he noted. “These men and women personified the values and characteristics that we hold dear as Cherokee people.  Their lives are living object lessons that we can observe and, more importantly, that we can emulate.” 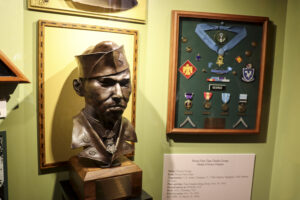 A display in the new Veterans Hall honors the courage of PFC Charles George – the Hall’s namesake.

Chief Sneed said it is important for those values to be emulated for generations to come.  “The responsibility falls to us to implement, and live out in our daily lives, the values that they have modeled for us.  In doing so, we are changed for the better.  Our hearts are made tender, our minds more pliable, our homes and places of work sanctuaries of peace.  This is what it means to be tribal.”

He said it is also very fitting that the new Veterans Hall be named in honor of PFC George.  “Because of his sacrifice, the lives of his comrades were spared.  He was honored for his heroism with the Congressional Medal of Honor – the highest military service award that can be bestowed upon a person.  Charles George exemplified the heroism, heart, and courage that we, as Cherokee, look to as an example for our lives.  Today, we remember his sacrifice and the sacrifice of all veterans.”

For more information on the Museum of the Cherokee Indian, visit: www.cherokeemuseum.org or call (828) 497-3481.