Tribal member’s work to be featured at Raleigh event

Xavier Davis is an artist, but he is also a storyteller through his artwork.  Two of his acrylic paintings will be featured at the upcoming 24th Annual American Indian Heritage Celebration at the North Carolina Museum of History in Raleigh on Friday, Nov. 8 and Saturday, Nov. 9.

“All of my paintings have stories to them,” said Davis, a member of the Eastern Band of Cherokee Indians currently living in Raleigh. 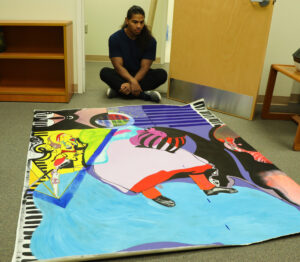 The two pieces that will be featured at the event include a 90” x 60” piece entitled “Obstructed Path” and another 6’ x 5’ piece called “Lucy George” – a piece honoring the late Cherokee basket weaver who was among the first in the Tribe to make baskets from honeysuckle.

“I don’t really like to paint something that isn’t a part of my story,” he noted about his “Lucy George” painting.  “I finished the painting and when I was looking up who she was and what she did, I saw that she started making baskets out of necessity and she wasn’t taught by her mom – she was sort of self-taught.  For me, it was like that for painting because I’d always drawn.”

Davis suffers from an auto-immune disease known as mixed connective tissue disease that attacks his connective tissues and causes him immense pain for large expanses of time.  It was during a flare-up that he took up the paint brush.  “For her it was a necessity, and for me painting was almost like a necessity.”

He has been painting for two years.  “I drew before that…I started drawing in this same manner in elementary school.  I remember the first time we went to the Aquarium, my dad asked me to draw what I saw.”

“I feel like a storyteller, but I tell the stories through images.”

On his paintings being selected for the upcoming event, he said, “I was really excited.  I’m still a little scared because I’ve never had a show…I feel very excited, and I’m going to use this as a learning experience.”

Davis said he hopes to be able to do a show in Cherokee, but he’d like it to be a full story.  “I feel like if I did a long-term, three- or four-year project, I could correlate all of the paintings together.”