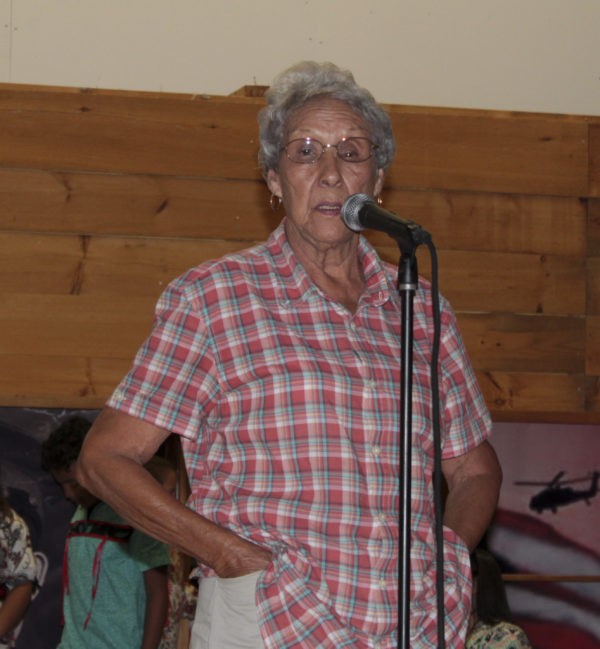 Hundreds of members of the Eastern Band of Cherokee Indians (EBCI) lined up inside and outside of the Cherokee Indian Fairgrounds exhibit hall on the afternoon of Thursday, Aug. 29 to receive a free book to help start them on a journey towards Cherokee language fluency.  The beginner Cherokee language books were distributed by the Office of the Principal Chief.

Tribal Council approved Res. No. 684, submitted by Principal Chief Richard G. Sneed and Wolftown Rep. Jeremy Wilson, last month which authorized funding for the printing of the books.  This effort comes on the heels of a declaration being made during June’s Tri-Council meeting that the Cherokee language is in a state of emergency.

“I, personally, have always felt that we have strived to make those efforts to get people to learn the language,” said Rep. Wilson.  “Times have changed and people do not always have the time they want or need to go to classes.  So, I think that by implementing the book into the home, it gives them that convenience to have that access to the language and learn it in the convenience of their own home.  They have family time for Cherokee 101 and listen to the audio through language CDs.” 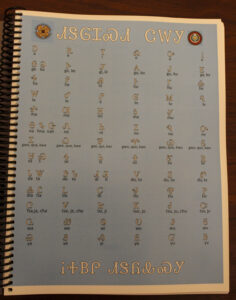 He said he hopes by the effort being a collaboration between Tribal Council and the Office of the Principal Chief that a strong message will be sent.  “We mean business with this.  I would like to see the Eastern Band make that strong statement that we’re really moving forward on this effort.”

The book has 21 chapters and covers many topics from basic words and phrases to greetings, introductions, and situations.

“Our language is what binds us,” said Bo Lossiah, New Kituwah Academy curriculum, instruction, and community supervisor.  “It’s what brings us together.  It’s what makes us a people.  You go to France, they speak French.  You go to Germany, they speak German.”

EBCI Beloved Woman Myrtle Driver wrote the book that was distributed.  “I hope this book is just the beginning of teaching everybody or anybody that wants to learn the language.”

She said the entire book will be recorded and distributed to tribal members on a CD.  “I have three very special people in mind to do the recording, and they are three of the first-year Adult Immersion Students.  They are doing so well.  They’re going out into the community teaching now, and I am so proud of them – Tohisgi Climbingbear, Matthew Tooni, and Amy Postoak.  They are doing a great job.  They give their everything to learn the language, and I give them about another year and they’re going to be fluent speakers.  It’s in their hearts to learn.” 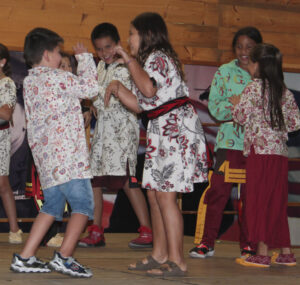 Chief Sneed thanked all of the tribal members who showed up to receive a book and showed interest in learning the language.  “It’s going to take a concerted effort from all of us in the community.  Our speakers, I thank you for all you’ve done and all that you continue to do to help us preserve the language, and I’m just very grateful for everyone being here today.”