The event was held to name the HIP Housing Development after Brown, who was a former Cherokee County – Snowbird Representative and was instrumental in establishing the development during his time in office. 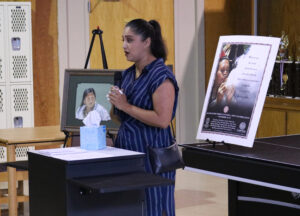 “I just wanted to send a message to the family – that I really miss your dad. He was a good person. He had a kind, big heart. He really worked hard for this community…I really appreciated him and all that he did. So, this ceremony is a truly fitting tribute to Mr. Diamond Brown, Jr.,” said Adam Wachacha, a Tribal Council chairman and representative for Snowbird and Cherokee County. He served with Brown on Tribal Council.

Chairman Wachacha was one of the numerous guests at the ceremony. Current members of Tribal Council, the Principal Chief, Vice Chief, and multiple people from Brown’s family were in attendance.

Dakota and Brooke Brown, Diamond’s daughters, spoke at the ceremony.

“I wasn’t expecting this many people,” said Dakota Brown.  “And so, I want to say thank you to all of you for coming today and being here to honor my dad and to be here for my family. My dad loved Snowbird. He was incredibly proud to be from Snowbird. No matter where we went and no matter where we traveled to, he was always very proud of that. Even when people didn’t know where that was, he told them.”

Brooke Brown, Diamond’s eldest daughter, said, “When I was about 12-years-old, my dad would make me stand in front of people and talk to strangers about my culture. And tell me what I needed to do and how I needed to say it, and I was mortified. And I was afraid. I was like, ‘I am not doing this.’ And he was like, ‘You are. You’re my daughter; you’re going to do it.’ And because of that, it helped me in a million and one ways, just like he has my whole life.” 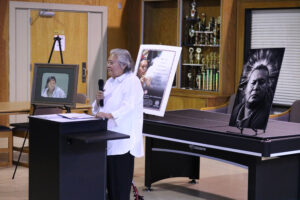 Freida Brown, Diamond’s mother, also spoke. She brought many in the room to tears.

“It’s sad for us. Because we love Diamond, I spent all the time I could his last few years he was here. He would call me early in the morning. He’d say, ‘mom what are you doing, come up here. I need to see you.’ And I’d just sit and watch TV with him, or I’d just sit and talk to him. I did not know he was on his way out. That’s what makes it so hard, he’s not here. Folks, I just love you all, and I thank every one of you.”