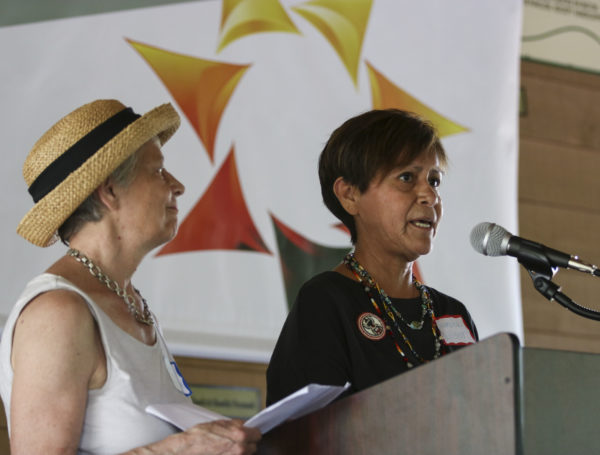 As Barbara McRae listens, Juanita Wilson, right, an EBCI tribal member, speaks at the beginning of the Honoring Nikwasi event at the Nikwasi Mound area on the morning of Saturday, Aug. 24 commemorating the deed transfer of the Nikwasi Mound from the Town of Franklin to the Nikwasi Initiative. McRae and Wilson serve as co-chairs of the Initiative. (SCOTT MCKIE B.P./One Feather photos)

FRANKLIN – In early May, the Franklin Town Council voted to transfer the deed of the Nikwasi Mound, a sacred Cherokee mound located in downtown Franklin in Macon County, to a non-profit organization known as the Nikwasi Initiative.  Members of the Eastern Band of Cherokee Indians (EBCI) joined Nikwasi Initiative and Town of Franklin officials for an event, called Honoring Nikwasi, at the Big Bear Shelter across the street from the mound on the morning of Saturday, Aug. 24 to commemorate the historic transfer.

The Nikwasi Initiative is a partnership between the Town of Franklin, the EBCI, Macon County, and the Mainspring Conservation Trust.

“What a great day, it’s been a long time coming,” Bob McCollum, Nikwasi Initiative board member and Cowee School Arts & Heritage Center director, said to open Saturday’s event.  “Some of us know some of the history.  Some of us know none of the history.  Think about, for a few minutes, the history that has taken place on this small patch of earth here – the culture that has been here for thousands of years, all of the events that have transpired right here at Nikwasi; and where we are today and where we will go in the future.”

The Niwaksi Mound is a site sacred to the Tribe and was put on the National Register of Historic Places in 1980, being listed there as Nequasee.

Juanita Wilson, an EBCI tribal member and Nikwasi Initiative co-chair, commented, “Being  second language learner and being part of bringing the second mound back home has been the greatest honor for me, and I hope that this will build partnerships across the region.” 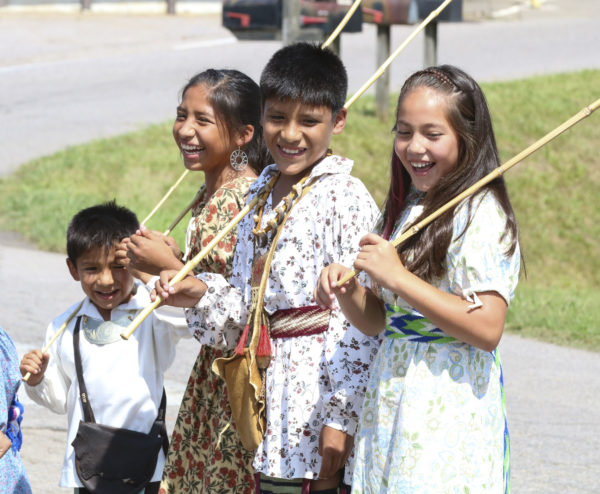 Principal Chief Richard G. Sneed said, “After the Removal, mounds like Nikwasi remained as a memorial to a once vibrant culture that flourished not only here but across the southern states that Cherokees called home.  That’s what makes today an even more historic day – a day when the past and the present unite and bring honor to a sacred site of the Cherokee; a day when our neighbors, here in the Town of Franklin and Macon County, and the Eastern Band of Cherokee Indians, a sovereign nation, say that from this day forward we commit to bestowing honor and care in perpetuity to this sacred site.”

He went on to say, “I think equally as important we commit to protecting and preserving every historic and sacred site that was so important to our ancestors.  This is our duty.  This is our obligation.  We must honor their lives.”

TJ Holland, an EBCI tribal member and EBCI Cultural Resources supervisor, spoke on the historical and cultural importance of Nikwasi Mound.  “It is a blessing to be a member of the Eastern Band and come to the places where our people were and stand in those same spots – to be in the towns that we’ve known were here for thousands of years.”

He added, “This place was not only known to us, as Kituwahs, as Cherokees.  This place was known on the eastern half of the United States as a special place.”

“The world is changing,” Holland continued.  “We start hearing the term ‘We’re all in this together’. I think that when the day comes we’re going to be judged upon not just the words that came out of our mouth, but our actions. I’d like to applaud the town leadership of Franklin for putting action to words, and for the Tribe to step forward. This is not just us saying that we’re in this together. This partnership and this agreement is demonstrating that. And, for that, I thank you. Sgi.”

Following the first part of the event, everyone moved to an area adjacent to the mound where Freeman Owle, an EBCI storyteller, told several Cherokee stories which was followed by The Principal People Dancers, comprised of young EBCI tribal members and second language learners mostly from the New Kituwah Academy, performing the Cherokee Beaver Dance and the Friendship Dance.  Little Miss Cherokee Morgan Hernandez closed Saturday’s event with brief words where she said it’s important to save the mound for her generation and those that will follow.