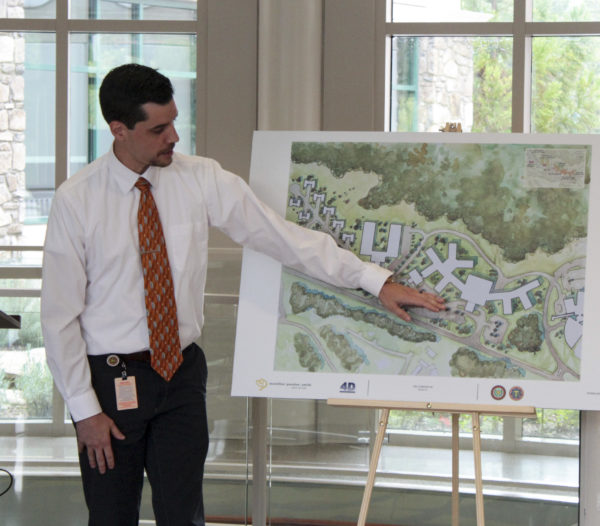 Earlier this month, Tribal Council approved legislation to go forward with building a comprehensive Senior Continuing Care Retirement Community to better serve the elders of the Eastern Band of Cherokee Indians (EBCI).  The amenities, layout, and overall care provided on that campus was discussed during a meeting on the evening of Monday, Aug. 19 at the Cherokee Indian Hospital.

“We’ve talked for a long time about the need for a new Tsali Care Center,” Principal Chief Richard G. Sneed said at the beginning of the meeting.  “Obviously, there are folks in the room tonight who have been big advocates for our elders and specifically for those who are at Tsali Care, and I appreciate all of you being here tonight.  I think one of the ways that we demonstrate our true character as a people is how we care for those who are most vulnerable – for our children and for our elders.” 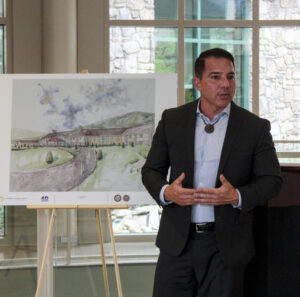 With a preliminary rendering of the possible layout of the new Senior Community campus behind him, Principal Chief Richard G. Sneed gives opening remarks during Monday’s meeting.

He said discussions with various tribal leaders went back to one central theme.  “When we were prioritizing what projects need to come up next, we made the determination that the best use of the adjoining property (of the Cherokee Indian Hospital) would not be for an adventure park, but instead it is well past time that our elders have assisted living, a new Tsali Care, and a new Dialysis Center.”

Vice Chief Alan B. Ensley commented, “It really brought things to light once we got into the new hospital with the big, spacious rooms.  It kind of breaks your heart to leave a hospital room up here then go down to Tsali Care to the ones we really want to take care of also.”

He said discussions have been held for years about constructing a new Tsali Care Center and Dialysis Center and finding a new way for patients to better utilize both.  “We want to hear everybody’s input…whenever we built the first Tsali Care Center down there, we’ve outgrown it and we need to move on and modernize it.”

The project is currently in the master planning phase which officials noted should take between six to eight months.

Damon Lambert, Cherokee Indian Hospital director of engineering, went over a preliminary layout of the overall campus.  “We want the Dialysis Center very close to the nursing home.”

Attendees at Monday’s meeting were given a survey to garner input on the project to see what the needs and wants of the community are. 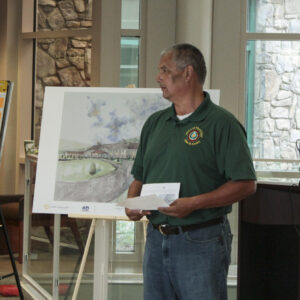 Vice Chief Alan B. Ensley speaks about the project and the road that led to it coming to fruition.

Peggy Hill, an EBCI tribal elder, said, “You really have to get down and ill before you can move into Tsali Care.  There are some there that would do well in assisted living.  They still have that independence.  They may have to be reminded of things or taken to doctor’s appointments; they still need that particular kind of care that we don’t have in our current system.”

During the meeting, Casey Cooper, Cherokee Indian Hospital chief executive officer, opened the floor to comments and suggestions on what amenities people would like to see included in the campus.  Numerous suggestions were made including: a common space for get-togethers such as parties and family gatherings in the Independent Living area; cultural offerings such as classes, crafts, performances, dances, and more; an area for gardening for residents; a library; a therapeutic swimming pool; a chapel; and a salon.  It was also suggested that the Skilled Nursing residential area include private rooms with more space and privacy for family visits as well as each room having its own shower/tub.

Rita Driver, an EBCI tribal member, said, “There is need for privacy.  There is need for bigger rooms so families can go in and visit.  They need security because you’ve got people going down there and stealing from those elders.”

She praised the work of the staff and CNAs at the current facility and said their salary needs to be increased.  “They work hard.  They work 12- to 14-hour days.”

Driver said she appreciated the opportunity to voice her opinion during the meeting and said more are needed as the project progresses.

Cooper noted that over 30 public meetings were held during the planning stages for the new Cherokee Indian Hospital and said that the facility turned out so well due in large part to that community involvement.  “The community gave us tremendous input…a project of this magnitude will take a lot of planning.”

Several questions were raised regarding what will happen with current staff and facilities once the new campus is completed, and tribal officials assured that no job loss will occur in the transition.  When asked if they plan to keep the current Tsali Manor once the new campus is done, Cooper responded, “I don’t think there would be a need if we are to build a new facility.  We’d replace it with the new facility.”

Tribal Council passed legislation during its Budget Council session on Tuesday, Aug. 6 to construct the campus.  The legislation was submitted by Birdtown Rep. Albert Rose, Wolftown Rep. Bo Crowe, and Dr. Blythe Winchester.  The project will be constructed on the Long Blanket Tract, an approximately 20-acre tract that sits adjacent to the current Cherokee Indian Hospital.