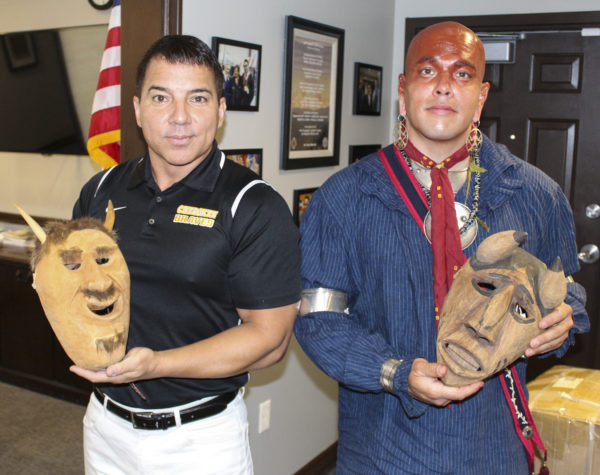 Principal Chief Richard G. Sneed, left, and Mike Crowe Jr. hold two Cherokee Booger Masks that were recently repatriated from the Seneca-Iroquois National Museum (Seneca Nation of Indians) to the Eastern Band of Cherokee Indians. During a small ceremony in the Office of the Principal Chief on the morning of Tuesday, Aug. 20, Chief Sneed presented the masks to the Museum of the Cherokee Indian where they will be housed in the collections archives. (SCOTT MCKIE B.P./One Feather photo)

Two Cherokee Booger masks, used during the Green Corn Ceremony, are now in the expert and trusted hands of the Museum of the Cherokee Indian.  The two masks were repatriated in a tribe-to-tribe ceremony in Salmanca, N.Y. earlier this month from the Seneca Nation of Indians (N.Y.) to leaders of the Eastern Band of Cherokee Indians (EBCI).

In a small, private ceremony in the Office of the Principal Chief on the morning of Tuesday, Aug. 20, Principal Chief Richard G. Sneed gave the masks to officials from the Museum of the Cherokee Indian.  Mike Crowe Jr., an EBCI tribal member and Cherokee Friend with the Museum, accepted the masks and transported them back to the Museum archives.  Cherokee cultural protocol dictates that these masks are only to be handled by men.

“First and foremost, we are very grateful to the Seneca Nation,” said Chief Sneed on Tuesday morning. “When we were there, one of the comments that was made is that this is really a first – one tribe conveying back to another tribe artifacts and ceremonial items that belong to that tribe.  The comment was made about how appropriate and how right this is and it needs to happen more.”

He added, “Like many things that the Eastern Band is involved in, it is a first and hopefully the first of many.  I trust that our Museum staff will display these in a manner that will bring honor to them.  I am just grateful for all of the work that they do in helping to tell our story and preserve our history.”

Following Tuesday’s small ceremony, Dawn Arneach, Museum interim executive director, commented, “For me, it does help to reiterate the mission of the Museum ‘to protect, preserve, perpetuate, and educate’.  So, for the Senecas to have reached out to the Eastern Band and for us to be able to send representatives up there and do a ceremonial exchange of the masks did open some doors.”

She noted that after initial press of the repatriation was known, she has received several emails from other museums and institutions regarding masks.  “We are getting more offers for masks that have been outside being able to come back to the Museum and back to the Tribe.  So, for me, it’s preserving and it will help educate other generations as well because these are older carvers that kids in school right now would have no idea who they are if we didn’t have these masks.”

Crowe commented, “I am very honored and humbled to be a recipient of these masks, and I think it is a momentous occasion for our people and also the Seneca and hopefully the first of many interactions of nation-to-nation which has been our history.  I think this is a good thing.  It’s a good start.”

Robin Swayney, Museum genealogist and archivist, noted that the masks will go in the archives collections initially and plans are being made for a large mask exhibit at the Museum in 2024 of which these will be featured.  “I think it’s a great asset to our archives and the building of our archives which we need to build not only the objects but also paper documents in order to become a better resource for our schools in the area.”

She went on to say, “I think it’s a good start for us to start conversation with surrounding communities that might have documents and artifacts, to bring them back home.”

The two masks were found in the collection of the Seneca-Iroquois National Museum and were repatriated to EBCI tribal leaders on Sunday, Aug. 4.  Chief Sneed was joined at that event by Tribal Council Chairman Adam Wachacha, Big Cove Rep. Perry Shell, and EBCI tribal elder Bernice Bottchenbaugh.  One of the masks was signed “Adam Welch” and the identity of the maker of the second mask is currently unknown.  It is estimated that both masks were made sometime in the 1940s.