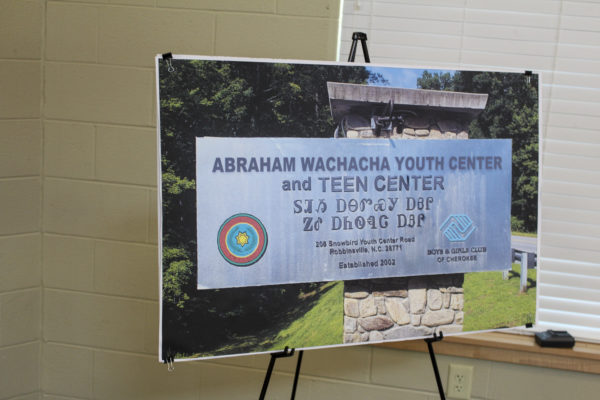 The Snowbird Youth Center was officially dedicated as the Abraham Wachacha Youth Center and Teen Center on the afternoon of Tuesday, Aug. 20. The photo shows a rendering of what the new sign will look like in front of the facility. (SCOTT MCKIE B.P./One Feather photos)

SNOWBIRD – A tribal leader and staunch advocate for members of the Snowbird and Cherokee County communities has been memorialized on a building he was instrumental in getting built.  The Snowbird Youth Center was officially dedicated as the Abraham Wachacha Youth Center and Teen Center on the afternoon of Tuesday, Aug. 20.

Wachacha served the Eastern Band of Cherokee Indians (EBCI) for 18 years on Tribal Council serving as Cherokee County – Snowbird representative from 1983-95 and 2003-09.

“This is such a special occasion, an occasion whose time is really 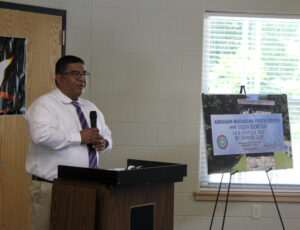 Tribal Council Chairman Adam Wachacha speaks during a dedication ceremony on Tuesday where the Snowbird Youth Center was officially dedicated as the Abraham Wachacha Youth Center and Teen Center in memory and honor of his father.

long past due,” said Principal Chief Richard G. Sneed who said that Wachacha served on Tribal Council at a time when the Tribe was really limited on resources.  “Throughout all that time, he was also the biggest advocate for the Cherokee County – Snowbird youth.  I think it’s pretty appropriate that we dedicate the Youth and Teen Center to him today.”

Vice Chief Alan B. Ensley served with Wachacha on Council for many years.  “When you serve with someone that long, you become friends with them.  It’s just an honor and privilege to be here.  I know the hard work that it took to get this place built.”

Tribal Council Chairman Adam Wachacha, Abraham Wachacha’s son, gave a brief history of his father’s work in getting the facility built.  He noted that on July 1, 2004, Abraham Wachacha introduced Res. No. 301 (2004) which was passed and called for a new Youth Center to be constructed.  It took many years of searching to find suitable land for the project.  Ground was broken in 2012, and the facility opened in 2014.  Council passed Res. No. 498 (2019) in February 2019 to rename the facility in memory and honor of Abraham Wachacha. 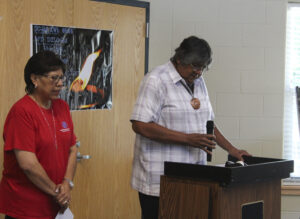 “I just want to commend him for his 18 years in office,” Chairman Wachacha said of his father who he related was very passionate about helping all of the youth in Snowbird.  “He wanted to have this facility not just for his own grandkids, but for all of the youth in the community.”

Cherokee County – Snowbird Rep. Bucky Brown said he knew Abraham Wachacha his entire life.  “I only have good stories to tell about Abe.  He always cheered my day up.  I was telling someone the other day that Abe had to be the funniest man I know.  He always brought a smile to me.”

Painttown Rep. Tommye Saunooke also served with Abraham Wachacha for many years on Council and spoke highly of his service.  “Of all the Council members I’ve served with, and I’ve been there 20 years, he had more wisdom.  He loved his people.”