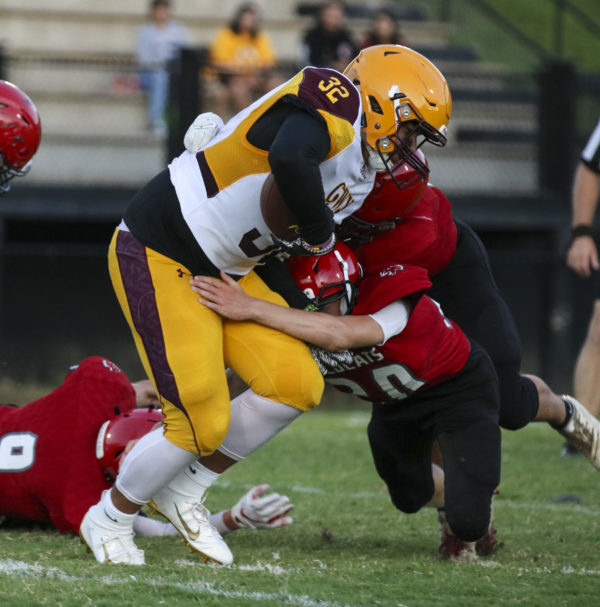 Napert, who is in his third year with the Braves and his first year as their head coach, says that an unfortunate mix of graduating players and injuries has severely depleted the team in some areas, especially the line. Currently, they do not have a single returning starter from the 2018 season on the line and are beginning to focus a lot of effort towards developing the young linemen.

An example of this is freshman Kensen Davis, who has trained extensively with Napert over the last year but is still just entering his first year of high school ball.

“He worked out every morning for at least four or five months with me, 6:30 in the morning every day. Never missed a day, and he was in 8th grade,” said Napert. 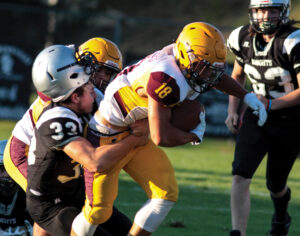 Davis has been taking some snaps as the starting center, and there’s a good chance he’ll be in the starting lineup to begin the season. Sophomore Mykel Lossiah has also stepped up on the line after getting hurt last year.

“He’s the real deal … he has so much raw strength.”

Napert pointed to Cameron Lane earlier this summer as an essential piece on the line moving forward, but he is one of the numerous injuries coming into the season. He is expected to miss at least the first game.

The line is not the only part of the squad with young players, as the lighten roster has multiple underclassmen fighting for positions in the lineup. Several freshmen graders have been working with the varsity.

Bobby Crowe looks to offer some senior leadership at quarterback. He is slotted to start, and Napert’s staff is getting creative in how to utilize his talent. He got hurt last year, which hindered some of his progression. Crowe is more of a pocket passer, but Napert says that he can tuck it and run if he needs to.

“The most important thing is the worry of being able to protect him…we’re going to have to get the ball out quicker and use some max protections.” 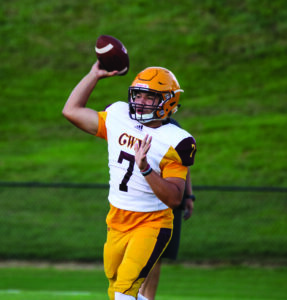 Another critical piece for the upcoming season is offensive weapon Anthony “AJ” Allison, who primarily plays running back and safety. Napert says they are moving the junior throughout the offense to get him the ball in different ways. The plan is to make him a versatile asset that makes game-planning difficult. Allison didn’t feature much in the offense last year, and Napert says his hard work has earned him a lot more touches for the upcoming season.

Napert says they plan to spread the ball around and get it out quickly. He says the offensive line is going to need time to gel and grow, and because of that base sets like power-running and deep drop-back passing won’t be as consistently viable early in the season.

The Braves have a tough task on opening night (Friday, Aug. 23) with an away game at Polk County. The Wolverines had a down year at 5-9 last season, but they are a tough team that usually brings a decent amount of size. Napert and the Braves saw this in-person last year when they scrimmaged before the 2018 season. Coach Bruce Ollis is in the third year of his second stint with Polk County. He also coached the team to five conference championships and a 110-42 record between 2002-13. Despite their record last year, Polk still reached the third round of the 1AA NCHSAA Playoffs.

Napert says that right now, they are focusing on the positives. He says there is a lot of young talent on the team, and they need time to develop.

“This is the hardest working group of kids we’ve had. Their attitudes have been very good, and we’ve been working them really hard. The key is to stick together through adversity.”