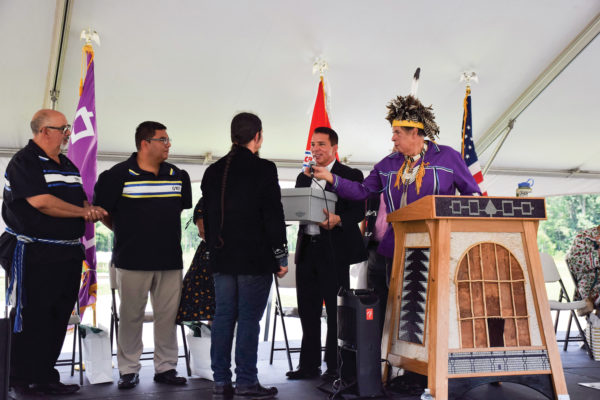 ALLEGANY TERRITORY (Salamanca, N.Y.) – The Seneca Nation of Indians has a longstanding relationship with the Eastern Band of Cherokee Indians (EBCI) dating back to ancient times. It was strengthened on Sunday, Aug. 4 ­­­– the first anniversary of the opening of the Onöhsagwende’ Cultural Center, which houses both the Seneca-Iroquois National Museum and the Seneca Nation’s Archives Department, through a special nation-to-nation repatriation of Cherokee Booger masks.

Seneca-Iroquois National Museum staff came across two ceremonial masks in their collection that were suspected to have come from the EBCI.  They were determined to be Booger masks, as confirmed by Bo Taylor, former executive director of the Museum of the Cherokee Indian.  These masks, which are only to be touched by men, are used during the Green Corn Ceremony that commonly takes place in mid-August.  The Booger Dance is performed during this season of harvest to ward off bad spirits and to let go of any negative thoughts or feelings from the previous year ensuring a new year with a fresh start.

EBCI Tribal Elder Bernice Bottchenbaugh expressed her delight in the exchange relaying, “I am so pleased that the EBCI will be receiving these traditional masks.  This ceremony is not just something our ancestors practiced, but a living tradition practiced by my family and others within the EBCI.  This is a special occasion for our tribe, and I am so humbled to be involved in this exchange.”

Seneca-Iroquois National Museum Director Joe Stahlman, highlighting the significance of this moment, stated, “Repatriation from Native nation to Native nation is uncommon. It typically occurs between university, state, federal, or any institution receiving federal funds and the Native nation the cultural items originally came from. We are very pleased to be able to host a delegation from the EBCI and offer this as part of our cultural center’s anniversary celebration.”

The Museum of the Cherokee Indians, the official repository of historical and cultural Cherokee artifacts, has agreed to house the masks in their archives.  Plans regarding long-term storage and display will be coordinated with Museum staff and Cherokee cultural leaders and elders.