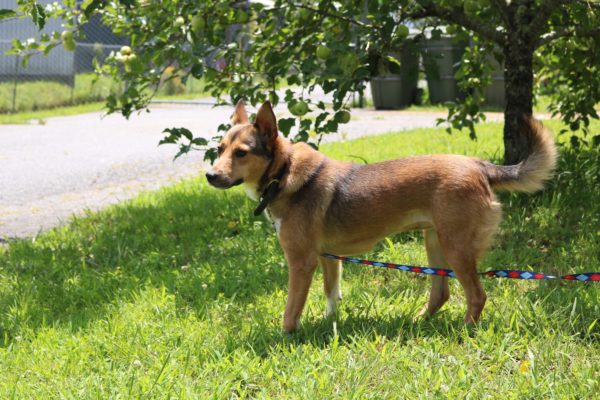 Jojo, a 3-year-old female Shepard-Collie, is one of the many animals that can be adopted now at the EBCI Animal Control program. (JONAH LOSSIAH/One Feather photos)

Over the last two years, EBCI Animal Control has been trying to change its public image.

Animal Control Officer Shane Davis says that they have had over 100 animals fixed and adopted through their program in the last year alone. It’s something that has been in the conversation for years, but Animal Control has been gaining momentum with this ‘second chance initiative.’

“It’s hard on us. It’s very stressful. Because I own dogs, [my assistant] owns dogs, my other assistant he owns dogs. We all three love dogs.”

The shift has been a challenging process for the program for multiple reasons.

For starters, it was difficult for Animal Control to find a veterinary or animal hospital that would take their business.

“A lot of vets don’t want to work with animal control because animal control has a stigma that we’re awful people. We don’t care about animals, we do what we do, and we’re just here to collect a paycheck.” 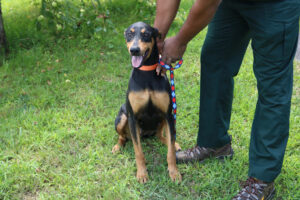 Toad, a 3-year-old female Doberman, is one of the many animals that can be adopted now at the EBCI Animal Control program.

“I think we’ll be doing quite a few more. We’ve got a start,” said Kern.

“It’s been hard for me figuring out a fair price where I’m not losing money but help them out.”

Another major issue has been the sheer quantity of animals that come through EBCI Animal Control each year.

While this is a large number, Davis says it has not fluctuated much in recent years.

“Our biggest problem is that we do charge. Because it’s not free. That was one of the things we wanted to stress, was we’re not just going to do, ‘here’s you a dog, go do what you want with it.’ Because we get the rabies vaccinations and the dog gets fixed, we leave it up to the owner for the other vaccinations and health care because we don’t have the money to do that. If we did that, we’d be cutting other animals out from finding homes,” said Davis.

EBCI Animal Control currently requires prospective adopters to fill out an application. After they clear you to adopt, it is a $125 fee to bring home the animal. This fee helps to cover the animal getting fixed and giving them the rabies vaccine. An application didn’t use to be part of the protocol, but Davis says they are trying to improve year by year.

Davis also says that while they are working to make their operation more efficient, a major issue comes from the community itself.

“It’s not the animals’ fault to begin with. It is, more or less, the owners who are the problem. People ask me all the time, ‘are you scared of the dogs?’ or ‘what’s the worst part of your job?’ I say usually it’s the people,” said Davis.

Kern and Davis both spoke to a concerning theme on the Qualla Boundary.

“Our trends usually come at per cap. Because a lot of people will dump their previous year’s dogs to get new ones,” said Davis.

“The hunters do it, but other people do it too. You see some nice purebred dogs come here. What’s this doing in a shelter?” questioned Kern.

Davis says that he is happy with the direction of his team and how much work they have done so far. However, he also says that they are moving to improve themselves and the community.

“We’ll keep trying to achieve more. We’re still not where I want to be.”