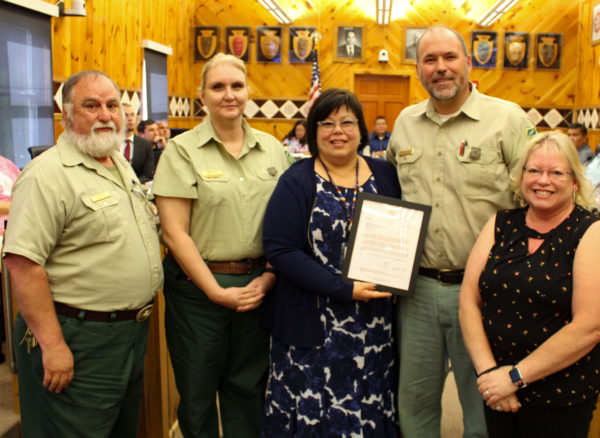 The TERO program of the Eastern Band of Cherokee Indians (EBCI) is the recipient of the 2019 Governor’s NCWorks Award of Distinction as an “Outstanding Employee”.  During the regular session of Tribal Council on Thursday, Aug. 1, officials from the Oconaluftee Job Corps Civilian Conservation Center (JCCCC), the nominating agency, recognized the TERO program.

“I’m proud to be a part of working with them and the Mother Town Project,” said Dean Smith, Oconaluftee JCCCC vocational manager.  “We have had a few of their interns come and work with us at the Center and they’ve all been fine, upstanding young members of society and worked out well.  From what we understand from the Governor’s office, there’s not been one of these awards in the western part of the state in a number of years.”

Jerry Bushman, Oconaluftee JCCCC acting director, said the Center has “great partnerships” with the TERO program.  He read a letter to Terri Henry, EBCI TERO manager, from N.C. Governor Roy Cooper, dated May 28, “I commend your organization’s commitment to developing the workforce by helping your clients reach their fullest potential, whether they are in recovery or have criminal records.  Your organization was nominated for this award by the Oconaluftee Job Corps for your demonstrated contributions to the economy and improved workforce opportunities in your community.  TERO was selected from among many deserving organizations from across our state because you embody the spirit of NCWorks.”

The letter went on to refer to the TERO program as a “positive role model for North Carolina’s employers” and stated, “A highly skilled workforce in which all people can participate is the key to success in the global economy.  Getting North Carolina ‘job-ready’ depends on the continued commitment of dedicated, innovative partners like you.”

Henry commented, “Thank you all so much for thinking about the TERO program here in Cherokee.  We’ve struggled a lot.  We’ve made a lot of great strides recently, and we are really committed to improving the workforce here on the Boundary which will rebound into the state of North Carolina.”

She also spoke of the working relationship between the TERO program and the Oconaluftee JCCCC and noted, “It’s a tremendous honor to work with you all.”

Henry also spoke of the Mother Town Program which she called “a wonderfully-special program”.  “These individuals have worked really hard and we’ve worked really hard with them.  We’re committed to leaving no one behind.  We need to make sure that our people who are struggling have an opportunity to come back into society and come back to join the workforce.”

Kim Lambert, TERO Commission vice chairperson, said, “We really appreciate this award and we appreciate the nomination.  We are committed to helping the workforce here.  Thank you to the Governor’s office and the Job Corps.”

TERO officials will attend the Governor’s Awards ceremony in Raleigh in October where they will receive the official plaque for the award.