EBCI member realizes dream of being a published author 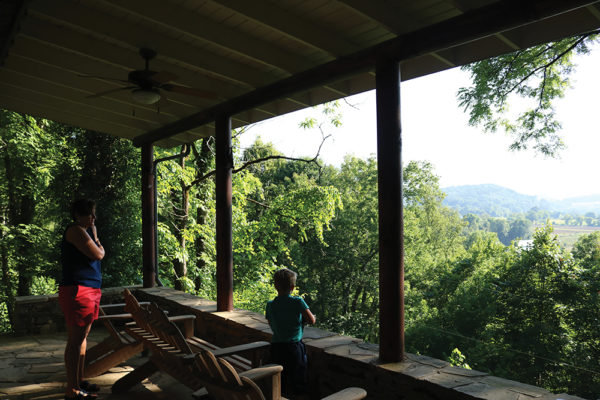 Annette Saunooke Clapsaddle, a member of the Eastern Band of Cherokee Indians, looks off her porch with her son. She is working on a novel, “Even as We Breathe”, which is due to be published next summer. (JONAH LOSSIAH/One Feather photo)

Annette Saunooke Clapsaddle sat alone in the bleachers. She stared at her phone screen, squeaking basketball shoes acting as white noise in the background.

She was there for her son’s ball game, but she had to make sure she wasn’t dreaming. She had received an email that had stunned her in the best way possible.

“I hope you can forgive my delay in responding to your submission. I wanted to make sure I had something firm to offer you before I was in touch. And I do! We would like to offer you a contract on ‘Even as We Breathe’.”

“Even as We Breathe” was her second novel, but her first contract offer. She was about to be a published author. The confirmation of years of hard work was just one reply away. It’s a simple thing to some people and a pipedream for others. It meant everything in the world to Clapsaddle.

“This has been a lifelong dream. It was a little surreal. I tried to check myself a little bit because I’d been disappointed before,” said Clapsaddle, a member of the Eastern Band of Cherokee Indians.

It was a long road to get to where she is now. She started her first novel, titled “Going to Water”, while she was in college at Yale University. She continued to work on it for years, through her first tribal job back from college and into her first stint as an English teacher at Swain County High School.

The book was loosely based on her grandfather, Chief Osley Saunooke. The novel was a finalist for the PEN/Bellwether Award for socially engaged fiction. This work carried a lot of momentum and looked like it had a chance of being published.

It didn’t, and it was a significant blow to her confidence as a writer. She was frustrated by the publishing process and wanted to move on. Clapsaddle didn’t give up on writing, though. What she did was listen to the people closest to her. Though she was a teacher for several years, she never stopped being a student.

That’s why it was so fitting that she landed in the classroom at the Thomas Wolfe Memorial House in Asheville. The class was taught by Heather Newton, and it was called “Gettin’ Her Done”. It was created to help aspiring authors get started with their books.

Newton quickly realized Clapsaddle’s talent and was surprised she was taking the class at all, considering she was a finalist for the PEN/Bellwether.

“I remember my first conversation with her was basically, ‘you know girl, you could be teaching this class,'” said Newton with a chuckle.

Newton’s class gave Clapsaddle the confidence and base that she needed to move forward with a second book. Another significant shift for her at this time was that she went back to teaching.

Clapsaddle had worked as the executive director of the Cherokee Preservation Foundation for the previous two and a half years and decided to step down in July 2015 to return to Swain High School. She says that it wasn’t an easy decision, but that teaching is her calling.

“I didn’t even realize how important teaching was to my writing,” said Clapsaddle.

“With teaching, I have material that I need to convey to other people, and I have to distill that down the way that connects with people. I think that constant practice helps me as a writer.”

Though Clapsaddle says she had even less time to write when she returned as a teacher, she was in a much better headspace to work on a book. Her students kept her thinking, and she was also working with other writers that she respected. 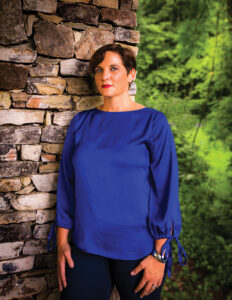 As she regained her footing for writing, Clapsaddle was more efficient than ever.

Many Thursdays in the summer you can find her at the family cabin. A gorgeous house perched on an outlook of Kituwah. It is a place of peace for Clapsaddle.

“I love the fact that I can look over Kituwah and always be reminded and centered in that way,” said Clapsaddle, peering out at the valley.

“When I need to refocus, I can come out here and refocus by seeing Kituwah and knowing nothing’s more important than that.”

Her father found the property years ago, and together they went to work on what is now the cabin. Almost hidden from the rest of the area, a small road hugging a mountainside leads to her sanctuary.

This place allows Clapsaddle to feel closer to her home. This is important for a lot of reasons, but especially for her writing. Her mission is to show real Cherokee culture. She wants to capture the sense of humor of Cherokee people, and the authentic aspects that make people Cherokee.

Her new book looks to battle stereotypes of her culture, and to use individual stories to paint a bigger picture.

“It is set during World War II at the Grove Park Inn in Asheville when they held access diplomats and foreign nationals as prisoners of war. It was for a very short period of time there. My main character is from Cherokee, Cowney is his name. He’s a young man, about 19, who leaves Cherokee to go work there that summer,” said Clapsaddle.

“While he is there, he is accused of being involved in the disappearance of a diplomat’s young daughter. So, the novel itself is set partly in Cherokee and partly in Asheville. It’s dealing with two major themes. One is familial identity – Cowney will grapple with some of his family relationships. And it’s also dealing with the complexity of race relations.”

Someone who understands Clapsaddle’s drive and goal is her new editor, accomplished novelist Silas House. The two first met when House was visiting Swain County High School for an event.

“I was just immediately impressed by the way she talked about literature and the way she interacted with her students. And several writers that I know had read her work and really bragged on her and said that she was the real deal,” said House.

He said that when the University of Kentucky Press offered him the editor position for Clapsaddle’s book, he had no choice but to accept.

“It’s just a voice that American literature is in dire need of. To my knowledge, a major press has never published a novel by an Eastern Band Cherokee. And that’s just mind-boggling that in 2019, we are still lacking that voice. I just think that she writes about a culture that so many people misunderstand. But first and foremost, she’s just telling a human story.”

Getting the news changed Clapsaddle’s life. But because of who she is, she didn’t celebrate alone. When she received the email that day before her son’s basketball game, she had to step out of the gym to call the people she loved.

She talked to her husband and her father. And she also had a meaningful conversation with Dawn Gilchrist, who was a Department Chair at Swain when Clapsaddle was first hired.

“She, more than anybody, was invested in the story. So, I couldn’t even talk. I just cried when I talked to her,” said Clapsaddle.

Gilchrist has had a significant impact on Clapsaddle’s life. She was a mentor and a true friend to Clapsaddle.

“There are only a few moments in my life where I have experienced pure joy, but that was one. The pure joy was coming from her, but I certainly felt it for her and with her,” said Gilchrist.

There were still logistics involved after accepting the offer from the University of Kentucky Press. But eventually, it was time to sign the contract. Clapsaddle was still in disbelief, so she wanted to make it a special event for herself.

She headed to Fire Mountain.

Mountain biking has become an essential hobby for Clapsaddle, of late. It works to clear her, it allows her to think about her writing, and it brings a stronger connection between her and the mountains she calls home.

“One of the major parts of the book revolves around a waterfall,” explained Clapsaddle.

It was done, almost. Two crucial things needed to be done.

The first was dinner. Clapsaddle rode back down the mountain and headed home, picking up Mexican food and champagne.

The contract also needed a final signature. Her husband, Evan, signed the witness copy of the contract and it was official. That night Clapsaddle and her family toasted the next step in her life.

Clapsaddle’s work is far from finished, but she says that she is so proud and happy to be where she is. The book, “Even as We Breathe”, is expected in the summer of 2020. Edits will be made, timelines crunched, and there are plenty more writing sessions up at the cabin.