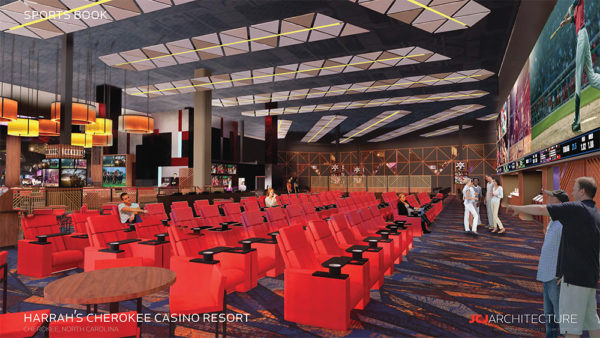 One business day after N.C. Governor Roy Cooper signed legislation making sports betting legal for the Eastern Band of Cherokee Indians, Harrah’s Cherokee Casinos officials released their plans to get the ball rolling on that enterprise of the Tribe.

“This is an exciting time,” Brooks Robinson, Harrah’s Cherokee Casinos regional senior vice president and general manager, said on Monday, July 29.  “We continuously work to offer new experiences and opportunities to our customers and are confident that our new sportsbook will be an added delight for our guests and sports fans.”

The bill amends G.S. 14-292.2 to include sports and horse race wagering as Class III games that may be “lawfully conducted” on EBCI tribal lands.  According to the bill, sports wagering is “the placing of wagers on the outcome of professional and collegiate sports contests”.  The bill describes horse race wagering as “fixed odds or pari-mutual wagering on thoroughbred, harness, or other racing of horses, including simulcasting and off-track betting”.  Both sections include this wording, “the wager shall be deemed to occur where it is initiated and received, all of which must occur on Indian lands within the state lawfully permitted to conduct Class III gaming activities.”