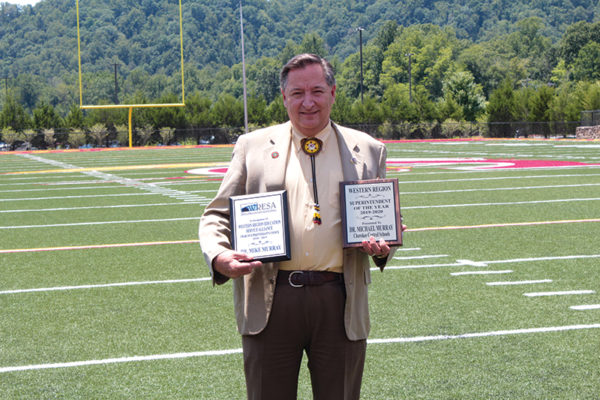 In his 35th year as an educator, Dr. Murray has been nominated before, but this is his first win – a win he credits to the faculty and students at Cherokee Central Schools.  “This school system not only deserves all of the credit, I am just blessed to be the one selected to lead it for the last couple of years.  I’m very honored to be selected for our region.”

The Western Region represents 13 counties in western North Carolina – “from Hendersonville to Murphy” as Dr. Murray put it.

He said he’s happy to have won the regional award and noted that while his name is on the award, it truly represents the work being done at Cherokee Central Schools these days.  “To me, it validates that in our region, and possibly in our entire state, that we’re part of something special.”

Dr. Murray said that the students are the focus of Cherokee Central Schools and that is a reason for the recognition.  “The bottom line is we should all focus on the kids and then support each other to get them what they need.”

He said this is also a win for mountain schools all throughout the far western part of North Carolina.  “Ultimately, none of the far west has ever gotten the credit they deserve.  I think it’s important for our region to not only be acknowledged by the state, but, our region has led in test scores for years.  Our mountain students are the smartest students in the state.  We have high expectations and they live up to them.”

Dr. Murray said that academics are the focus at CCS, but athletics, performing arts, cultural programs, and more help students to receive a well-rounded education.  “I’m excited about every way that a student can connect with Cherokee Central Schools, but the most driving force should always be how are they doing in those classrooms?  Are they making the achievement levels they need to, and if they’re not, why not?”

He added, “I’m excited about the future.  I am enjoying every moment of the ride.”

The N.C. Superintendent of the Year award will be announced during the NCSBA Conference in Greensboro on Nov. 13.