American Legion Auxiliary – What is the Auxiliary?

The Eastern Band of Cherokees is a Tribe whose members have a strong sense of fighting for freedom.  We are lucky to have so many veterans! 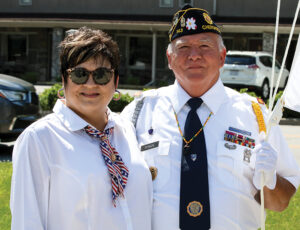 Lisa Penick, left, is shown with her husband, Charles, at the 2019 Memorial Day event hosted by the Steve Youngdeer American Legion Post 143 at the Cherokee Veterans Park. Lisa is the secretary for the Post 143 Auxiliary. (SCOTT MCKIE B.P./One Feather photo)

Our President is Patsy Ledford, Carol Long is our Vice President, Lisa Penick is our Secretary, and Sharon French is our Treasurer.

Our mission is, “In the spirit of Service, Not Self, the mission of the American Legion Auxiliary is to support The American Legion and to honor the sacrifice of those who serve by enhancing the lives of our veterans, military, and their families, both at home and abroad. For God and Country, we advocate for veterans, educate our citizens, mentor youth, and promote patriotism, good citizenship, peace and security.”

For each meeting, for each service activity to our veterans, for each of our currently members in the military, the Auxiliary finds we need more women to help us to help our military and our veterans. As we work to ensure the future growth and prosperity of the Auxiliary – we need your help.  Please consider joining us at our next meeting on Monday, Aug. 19 at the American Legion Post (Old Civic Center/Court House) on Acquoni Road at 6 p.m. to 8 p.m.