ON THE SIDELINES: Mariah Bahe making mark with Puma commercial

It’s hard to turn on the television without seeing at least one commercial involving a sports figure with athletes endorsing everything from actual sporting equipment to food.  Usually, those commercials feature the top professional athletes, but a young lady from Chinle, Ariz. is breaking through that wall and bringing Indian Country with her. 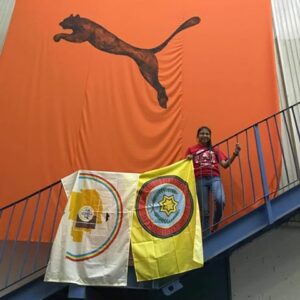 Mariah Bahe, a member of the Navajo Nation with Eastern Band of Cherokee Indians heritage, is shown on set for a Puma commercial that was shot in early July in Warsaw, Poland. (Photo contributed)

Mariah Bahe, a member of the Navajo Nation with Eastern Band of Cherokee Indians heritage, is a top-ranked junior boxer.  Last December, she placed second in the Junior Girls 95lb division at the USA Boxing Elite and Youth National Championships.

Earlier this month, she spent several days in Warsaw, Poland shooting a commercial and doing a photo shoot for Puma.  “I think it’s a really great opportunity to show that anyone from anywhere can achieve big things,” she said.  “And, for my tribes, it shows that we are capable of holding these high standards and big dreams for ourselves.”

The commercial is set to air in November.

Bahe expressed her happiness at representing Native youth in a project of this magnitude.  “I think that I, as a Native American, hold a high bar on native athletes and that I’m an inspiration towards them.”

Sometimes, athletes will endorse products that seem very out of their league – pun intended.  Do you remember the 1998 AMF Bowling commercial starring his airness Michael Jordan where kids could “learn to bowl with Michael”?  But, when Jordan ends a commercial with “AMF, always means fun”, how can you not just love it?

I am hopeful that we will begin to see more and more Native athletes featured on commercials and receiving endorsements.  Right now, there aren’t that many high tier Natives athletes but those numbers are growing, and there are some including: Sam Bradford (Cherokee Nation), Heisman Trophy winner who has played quarterback for several NFL teams; Chris Wondolowski (Kiowa Tribe of Oklahoma), Major League Soccer’s all-time goal scorer; Kyrie Irving (Standing Rock Sioux), NBA star who recently received his Lakota name in a ceremony on the Standing Rock Sioux Indian Reservation in North Dakota; and several  others.

Bahe’s goal is to box in the Olympic Games; something she works on every day.  She told the One Feather that she hopes to box in the 2024 Paris Games “to show every girl out there that anything is possible”.

With this commercial, she is well on her way to showing Native youth across the world that anything is possible.  You just have to work hard, have a dream, and not be afraid to tackle the obstacles as they come – and having an endorsement deal or two doesn’t hurt either.