Not So Rough Branch

Work to revitalize Rough Branch Road has been ongoing for about two years. The project was finally completed last month.

It has been one of the top priorities of the Cherokee Department of Transportation (CDOT) over the last few months. Eden Brown, the manager of the CDOT, says that it took a lot of preparation before the primary work could begin. The roadwork itself didn’t start until Fall of last year, according to Brown. 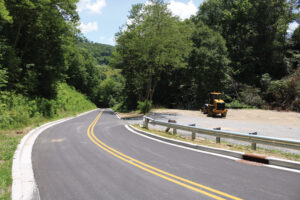 Work to revitalize Rough Branch Road has been ongoing for about two years. The project was finally completed last month. The road is shown in this photo taken on the afternoon of Monday, July 8. (JONAH LOSSIAH/One Feather photos)

“We did sidewalks, we just took a gravel road and completely repaved it, and inside curb and gutter to help with the drainage issue up there.”

Along with the roads, the parking lot for the Rough Branch gym was also paved and upgraded. The work stretched the entire length of Rough Branch, from the base by Highway 19 all the way through the housing development.

This was a large project that had a budget of about two million dollars, according to Brown. However, she says there was more accomplished than initially meets the eye.

“They did a complete infrastructure tear out before the road was even put in. There were also waterlines – all the water lines were replaced. So, there’s an all new water and sewer system. There’s also utility work. Haywood Electrical came in and took out all of the powerlines and replaced those. So, it’s completed upgraded.”

Ethan Arch, the manager of Cherokee Water and Sewer, says that his team had been doing work at Rough Branch the last two summers in preparation for this project. He says their primary job was put in new meter setters for the services lines in the area. 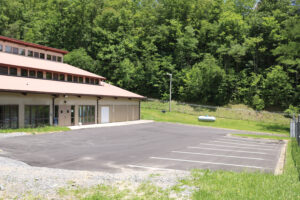 The parking lot of the Rough Branch Community Center also received a facelift.

“All the utilities up there had been there since the place was built. We just saw an opportunity to upgrade everything and did it,” said Arch.

Brown says that this project has a lot of benefits. She says it will help with maintenance costs, adds accessibility for those living in the area, and makes the road a lot cleaner.

She also says there has been primarily positive feedback from the community. There were some issues that arose with water run-off, but she says those have either been fixed or will be fixed soon. The Qualla Housing Authority says there haven’t been any other major issues or complaints reported.

Now with the Rough Branch project finished, the CDOT will turn its focus to other roads, namely Highway 19. Brown says that they are collaborating with NCDOT on this work, with the CDOT are managing the contracting for the highway. That project is expected to be done by the end of September.