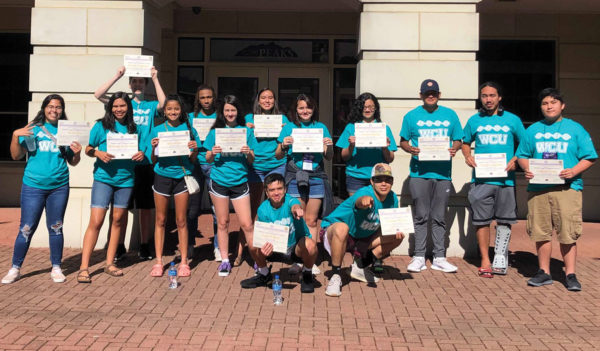 CULLOWHEE – Fifteen high school students from across the region who are members of the Eastern Band of Cherokee Indians had an opportunity to experience college life first-hand as the second annual Judaculla Camp was held June 17-21 at Western Carolina University (WCU).

WCU’s Cherokee Center and the tribal education Summer Youth Program partner to offer the camp, which exposes the youth to educational opportunities and involves them in activities such as archeological digs, scavenger hunts, natural art projects, climbing on the university’s indoor wall and rafting.

“The camp also exposes these students to workshops on bringing your identity to college, networking with both current students and alumni, learning about and owning the history of campus, Cherokee language, and our health connection at WCU in nursing, biomechanics and Native health,” said Sky Sampson, director of the WCU Cherokee Center. The students spent the nights in residence hall rooms, dined on campus with their own Catcards and generally learned about activities that are available to college students, she said.

“It was an absolute joy to host these students on campus, and we built bonds with them which will hopefully encourage them to attend college in the future,” Sampson said.

Many individuals on the campus had a hand in making the camp a rich experience for the students, including volunteer speakers from the faculty and staff, WCU students and alumni who are members of the Eastern Band, the conference staff, and representatives of the Division of Academic Affairs, Office of Mentoring and Persistence to Success, Cherokee Center and Office of Residential Living, Sampson said.

“And, of course, we thank the Eastern Band of Cherokee Indians for allowing us the honor of partnering on this camp each year,” she said.

For more information about Judaculla Camp, contact Sampson at snsampson@wcu.edu or 497-7920.