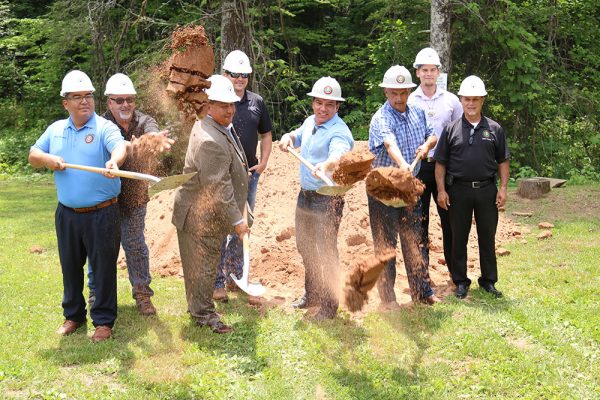 SNOWBIRD – The Snowbird Community is getting a new 48,000 square foot community center. Various leaders of the Eastern Band of Cherokee Indians (EBCI) made the trip for the groundbreaking ceremony on Thursday, May 23. It will be built on the same land where the old complex sits now.

“It’s a wonderful day for Snowbird,” said Principal Chief Richard G. Sneed.  “The facility they’ve had has kind of been patchworked and piecemealed together over the years, but they’ve been extremely patient.”

Cherokee County – Snowbird Rep. Bucky Brown presented a resolution to Tribal Council last year and was ecstatic that it the project is underway.

“It’s been a long time coming for the Snowbird people. The last community center was built in the 1970s, and we’ve kind of outgrown it,” said Brown.

The current complex is noticeably aged, and each building has been constructed as needed in the past. This project will rebuild the entire community center and function much smoother.

“I want to give a shout-out to our project management team. This is probably the fastest moving project ever in the history of the Tribe for a project this size,” said Chief Sneed.

Chris Greene, the manager of the EBCI Project Management Office, says that this project is expected to be completed within two years, and possibly as soon as the end of 2020. It’s a phased project that will involve demolition of specific buildings in order while keeping parts of the community center functional through the process.

“The buildings are just getting older, and what this does is it replaces all that with a new state-of-the-art building which should last 30 years at a minimum,” said Greene.

He also said that the total cost of this project has yet to be calculated, but that the it will increase the efficiency of the complex.

It is the second groundbreaking in two days, with the Kolanvyi Community Center holding an event yesterday. It is a busy couple of weeks, with the groundbreaking of the new Cherokee Youth Center coming Friday, May 31.